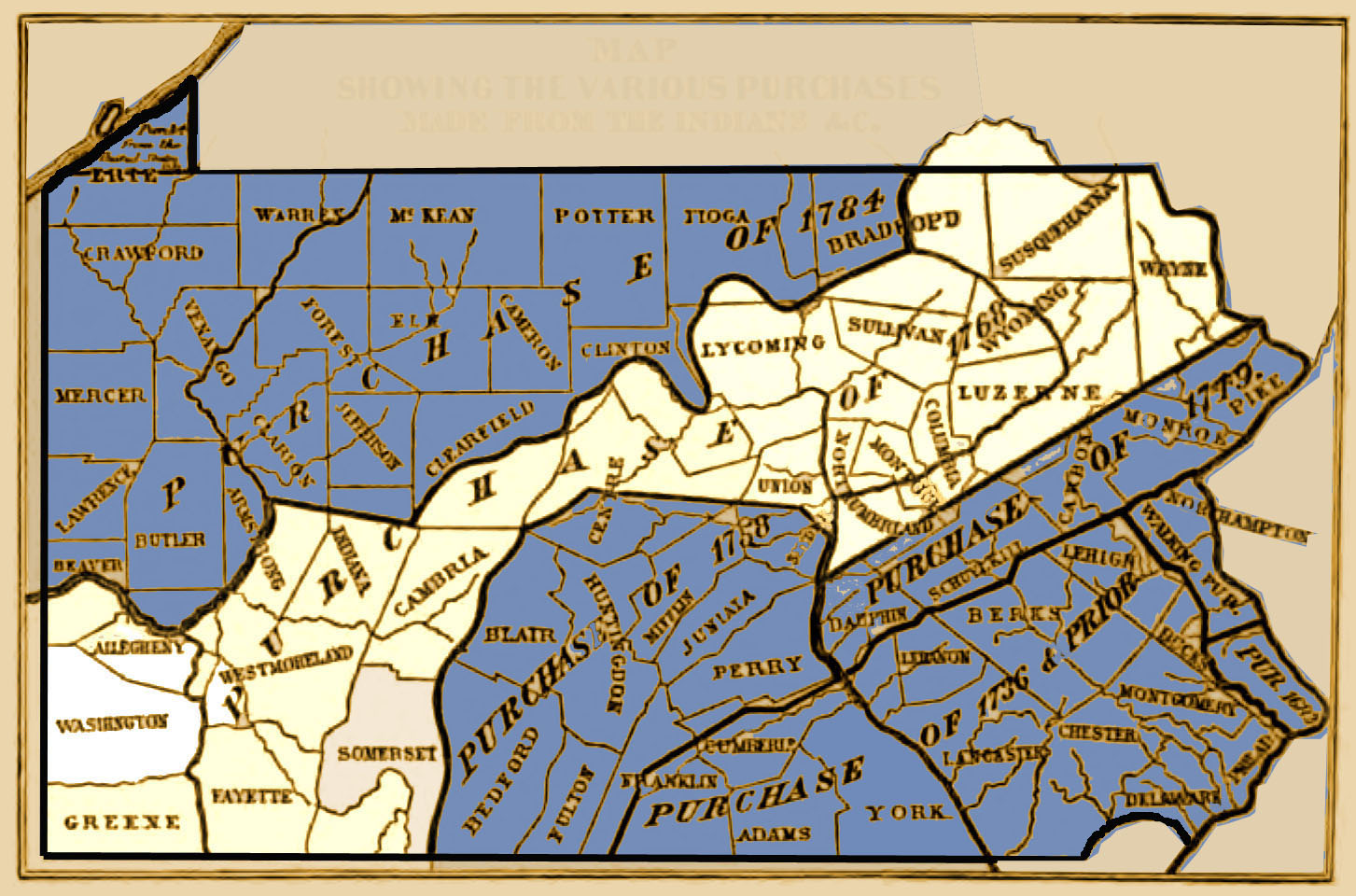 Background: To their credit, William Penn and his descendants refused to sell land to settlers until they first obtained it through purchase or by treaty with the Indians. This doesn't mean that white settlers stayed in the territory which was legally theirs--plenty of "squatters" moved onto territory before treaties were worked out. This raised tension between the two groups, culminating in many attacks on frontier settlers and eventually the full-blown conflict known as the French and Indian War (1754-1763). After years of bloody conflict which took the lives of countless Indians, British, French, and native-born "Americans," the war was settled with the Treaty of Paris of 1763. In order to prevent further outbreak of hostilities, the King of England decreed the Proclamation of 1763 which prohibited colonists from moving west of the Appalachian Mountains, creating a buffer zone between the whites and Indians. The effect of this proclamation was mainly to cause anger among colonists who either had moved or began to move into the lands which required no money but required them to risk their lives on the dangerous frontier. (He also changed the policy of laissez faire regarding tax collection, further inflaming tensions between the colonists and the British--within 12 years the slogan "No Taxation Without Representation" rang out and we know what happened then!) Indians lost more and more of their former territory after their defeat. Within 5 years, a major treaty at Fort Stanwix, NY, in 1768 resulted in the New Purchase of land from the Indians which opened the vast swath of land shown in the map above to legal settlement.

New Purchase Lottery: On 23 Feb 1769, the Land Office advertised the sale of the newly purchased land, saying "The Land-Office will be opened on the Third Day of April next, at Ten o'Clock in the Morning, to receive Applications from all Perfons inclinable to take up Lands in the New Purchase...." A person could submit an application for a maximum tract of 300 acres, and applications began to pour in. In fact, by the advertised date, 2,802 applications had reached the Land Office. Sometimes two or more applications were submitted for the same land. In order to make the proces as fair as possible, a lottery system was devised. All of the applications, most of which had been submitted on small slips of paper, were put into a box. If several applicatons were written by different people on a single sheet of paper, they were cut apart before being put in the box. They were drawn out one at a time. Each New Purchase Application was numbered sequentially and the tracts reqiested were awarded on that basis. When a tract of land was applied for by two or more parties, the application with the lowest number was accepted. After the application was accepted by the Land Office, the land was surveyed. After the survey was returned to the Land Office and fees were paid, a "warrant to accept the survey" was issued. Then a "return of survey" was prepared by the Surveyor General which certified that the survey was accurate, giving the name of the original applicant, a description in metes and bounds of the tract, the names of the adjoining neighbors, and the history of the ownership of the tract if it had changed hands. Finally, after the warrant to accept was returned and the fees paid, the Land Office in Philadelphia issued a patent bestowing official ownership (what we would call "title") of the land to an individual. The patent issued by the colony or commonwealth of Pennsylvania was the very first transfer of land from the government to private owners. After an individual received the patent, he or she could buy and sell the tract through deeds which were recorded at the county level and no longer involved the state or colonial government.

In 1770, soon after the New Purchase allowed expanded settlement within Pennsylvania, William Scull drafted a map of the colony (6.88 MB). Scull was personally acquainted with much of Pennsylvania since he was one of the surveyors who platted land within the New Purchase. His map shows many of the topographical features which the applications use to describe the location of the requested tracts. This was the best map available of Pennsylvania at the time and is often referred to in official documents.

Images of the Original New Purchase Application Register (.pdf file): Each page of the New Purchase Applications Register has 6 columns: (1) Date of application; (2) Number assigned in the lottery; (3) Name of applicant; (4) Number of acres applied for; (5) Description of location; and (6) Where the survey was recorded (book and page number). In addition to the "official" entries, handwritten marginal comments usually give current townships and counties. If the New Purchase applicant had transferred ownership of the tract to another person, the "Name of Applicant" shows to whom the warrant was returned and the date of the return. Under the "Description of Location" heading, the neighbors are usually given and sometimes fairly specific locations. For example, Aneas Mackay'S application was drawn and given the number 83. According to the "Description of Location," his 300 acres were "In Turtle Bottom known by the name of Dirty Camp about 17 Miles Eastward of Fort Pitt on the Great Road leading to Legoneer including his Improvement." The warrant was returned 16 Mar 1789 to Stephen Bayard & Wife on 16 Mar 1789. His survey was recorded in Survey Book C10, pg. 112.