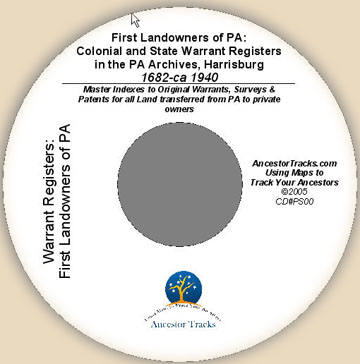 The process for obtaining land in Pennsylvania involved a 3-part process: (1) the prospective landowner had to file an application for land in fairly specific terms. When the Land Office received the application, they issued a warrant, or an order to have the desired tract surveyed. The applicant had to pay a fee for this warrant and became known as the warrantee. The loose warrant was copied into a ledger called a Warrant Register. (2) The next step was to pay a fee for the survey and wait until a deputy surveyor could be assigned to do the work. The results of the survey were returned to the Land Office with a precise description and map of the tract, nearly always including the names of the neighbors who owned the adjacent tracts. These loose surveys are on file at the Pennsylvania Archives in Harrisburg and have been copied into Survey Books. (3) The last step was to pay yet another fee to the colony or state and receive the final title which was called a patent. This is the official deed transferring ownership from the colony or state to the individual. He or she now became the patentee. Again, the patents were copied into ledgers called Patent Registers. Sometimes, many years passed between the 3 steps.

In our experience, perhaps 60-70% of the warrantees of a county were also the patentees. Often, however, the original warrantee died and the land passed to a relative or was bartered (sometimes for a gun or a coat) or sold to someone else; or he stayed on the land for a short while before moving on (usually west) and transferred the land to someone else who then patented it and became the patentee; or he was a speculator who never intended to settle on it and transferred ownership to someone else to then patented it.

Thus, there are two major references to check when researching early Pennsylvania land records: The Warrant Registers and the Patent Registers. A third register, which is an index of all of the names of tracts patented before about 1830, can be consulted if the name of the family tract is known but the name of the warrantee and patentee are not known. This CD contains all of the indexes to the Warrant Registers (67 volumes which are the master indexes) for the original sales from the Penns, and then the state, to a majority of the first legally-recognized owners of private land throughout Pennsylvania. As the published description of the registers states, "This is the primary finding aid [in the Pennsylvania Archives] for locating patents and surveys when the name of the warrantee is known. Information given is warrant number, name of warrantee, type of warrant, acreage warranted, date of warrant, date of return, acreage returned, name of patentee, the patent volume, book, and page number and the survey book and page number. The names of the warrantees and warrant dates extracted from some of these registers were published in Pennsylvania Archives (series 3) volumes 24-26, but the published version omits the warrant numbers, return of survey information, and patent information."

Note also that those county registers which were published also omit the names of the patentee and the location of the land (usually the watercourse or the township), two vitally important pieces of information for the genealogist.

ALSO included on this CD is the "Old Rights Index" for Bucks and Chester Counties, as well as the "Old Rights Index" for Philadelphia. These indexes predate the warrant registers above, covering the three original counties from 1682 to 1740. Used together, these registers encompass all of the sales from the Penns and the Commonwealth of Pennsylvania except for the Last Purchase Warrant Index, and the Proprietary Rights Index (for warrants issued to the Penns or their associates) which have never been scanned.

A little background is in order: The original three counties--Philadelphia, Chester, and Bucks--were established in 1682; other counties were set up as people became dense enough to warrant a courthouse. Thus, as each county came into existence, the PA Land Office created a new register and began entering the land sales as they occurred. Thus, the warrantees are entered under the county as it existed at the time of the sale, then under the letter beginning the last name, and then more-or-less chronologically thereafter. For the researcher, having all of the county Warrant Registers in one place makes the search of the records far easier. The next search for your early Pennsylvania settler is the Index to Patent Registers CD. Remember, these registers, or ledgers, predate the deed books at the county courthouses. They document the very first landowners of the colony, or state, of Pennsylvania.

The following is a comparison between the first page of the Philadelphia Warrant Register on this CD and pg. 3 of the published Pennsylvania Archives, 3rd Series, Vol XXIV:

PA Archives 3rd Series, Vol XXIV, pg. 3 (Note there are 3 columns of information for each tract)