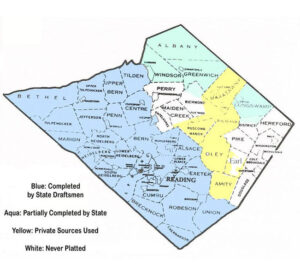 On this page, you will find the latest revision (2020) of our atlas (first published in 2007) for sale, showing the metes-and-bounds tracts of the very first owners of land in Berks County.  It contains all of the Township Warrantee Maps drafted by the Pennsylvania Land Office in the early 1900s.

The draftsmen at the Pennsylvania Land Office painstakingly platted each original tract into current township boundaries using the Warrant and Patent Registers to create the Warrantee Maps. They searched each county and parent county, then each alphabetical section chronologically, in the set of 67 county Warrant Registers plus 3 pre-1733 ledgers called First Landowners of PA: Colonial and State Warrant Registers in the PA Archives, Harrisburg, 1682-ca 1940 ($35) which can now be downloaded and saved to your computer. (Free images  are also posted on the Pennsylvania State Archives website where each page of each county’s ledger is a separate pdf file).  The Pennsylvania State Archives has posted the free online surveys (check both front and back sides) and you can order copies of the original documents from the Pennsylvania State Archives in Harrisburg using their order form.   The draftsmen also searched Pennsylvania’s index to Patent Registers ($35). Within an index covering the relevant years, the names are grouped alphabetically by the first letter of the patentee’s surname, then grouped by volume number of Patent Book, and finally arranged chronologically by date of patent. Thus, the entire alphabetical section must be searched (which may be as little as one page to as many as 50) so as not to miss anyone.

The maps show precise outlines in metes and bounds of each original tract and all surrounding tracts in the township, giving the names of the warrantee and patentee; dates of the warrant, survey, and patent; and the patent and survey books and page of the recorded patent. Please be aware, however, that the state only platted 23 townships, or just over half of the county, before the project came to a halt. Therefore, similar maps from several other sources, although with less information regarding the tracts, have been added to this volume.

We have added our own research to the resources on Oley, Centre, Maxatawny, and Rockland Townships to make them complete, but some work remains to be done on the remaining maps. The result is that original plats of the earliest landowners of over 75% of the county can be found in this book.

Each chapter begins with the Township Warrantee Map produced by the state draftsmen. A second map follows, cropped to eliminate marginal information, with atlas coordinates superimposed upon it. The third map for each township, which was formerly available only on a companion CD at separate cost, consists of modern road maps superimposed on the warrantee map by the Berks County GIS Department.

Following these maps are charts (see sample below) which include each fact included on every tract in the Township Warrantee Maps: names of the warrantee and patentee; size of the tract; name of the tract, if given; dates of the warrant, survey, and patent; Survey Book and page number where the survey was recorded; Patent Register and page number where the patent was recorded; and, finally, the coordinates where the tract in question is located. Numerous footnotes give further information, including neighbors shown on surveys at the time the survey was conducted.  Some of these neighbors do not appear anywhere else in land records.

Before your buy our Atlas of Berks County tracts, see if the name(s) you are looking for appear in the 609-page Atlas Index. To see if they appear in individual township chapters (downloadable as pdf files), Index to Individual Township Chapters by SURNAME,” or to see the index by neighborhood, click on “Berks County Index by TOWNSHIP.”

The majority of the warrants were issued before the first U.S. census in 1790, but some of the land transactions occur as late as the 1920s.

No maps are included for the following townships: Colebrookdale, Douglass, Earl, Hereford, Ontelaunee, Perry, Pike, and Washington, We have added as much information as we could find for these townships from the East Side Applications Register (1765-1769) for these areas to document the first landowners, but these tracts are generally not located on the maps in this volume.  Partial maps and maps with little detail (sometimes only a name and year) are given for the following townships in the atlas: Albany, District, Greenwich, Longswamp, Maidencreek, Windsor, and Richmond.  Some of these names are not in the index.

Samples from the Berks County Atlas:  Below is a a part of an image of the Bethel Township Warrantee Map showing the type of information shown on each plat (see Philip Kremer’s tract at the top) and a the sample atlas page for this township showing the entry for Philip Kremer. The Township Warrantee Map superimposed by the Berks County GIS division onto modern road maps (included in this atlas) is on the right below.

You can order the entire atlas or each of the individual township chapters as follows:

To see where the townships are in relation to each other, click here.  Berks County was formed in 1752 from Chester, Lancaster, and Philadelphia Counties and contained Schuylkill County until 1811.

The 1876 Historical Atlas of Berks County has been posted online at The U.S. Genweb Archives site.  Use this in conjunction with the 1870 and 1880 censuses, as well as published county histories.

In addition to our Warrantee Atlas, there are several other maps showing the history and landowners of the county. The following is a map showing Berks Co. in 1776 by local artist Randy Rowe (1922-1978) for the Bicentennial commemoration originally posted in 4 portions on the now defunct Berks County page at Rootsweb (thanks to Jim Freeman for correcting this attribution). We have combined the 4 sections and are posting it with permission. Click on the small image below to see the details—it is a large map so it may take some time to load. It can be enlarged by clicking on the image and then clicking on it again, and it may be saved to your computer by right-clicking and selecting “Save Image As…” 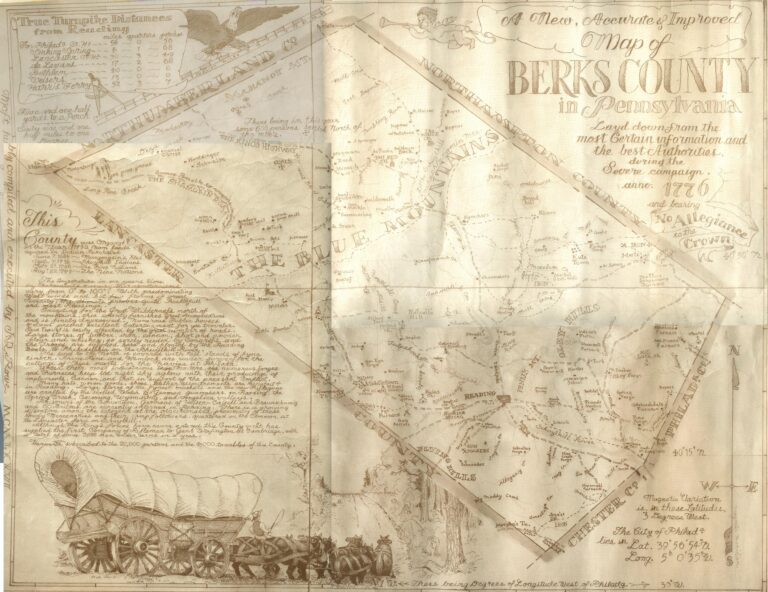 Finally, we want to draw your attention to the wonderful work by the Berks County Recorder of Deeds. The department has uploaded searchable images of all deeds and mortgages recorded since 1752. The images can be printed or saved as pdf files for a small charge. You will need to set up an account, but after the account is set up you will be able to see all images, even if you do not care to print or save them.