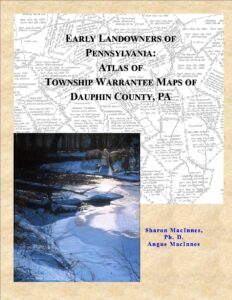 Original Land Owners: The 7th volume of our county atlases in the “Early Landowners of PA” series has been newly revised in 2020. This Dauphin County atlas contains all information shown on the 24 Township Warrantee Maps, one for each township, which were produced by the Pennsylvania Land Office in the 1940s. See our explanation of how land was transferred from the government to individual owners from the earliest days of settlement.

Each chapter begins with the Township Warrantee Map produced by the draftsmen. A second map follows, cropped to eliminate marginal information, with atlas coordinates superimposed upon it. The third map for each township, which was formerly available only on a companion CD at additional cost, consists of modern road maps superimposed on the warrantee map by the Dauphin County GIS Department.

Following these maps are charts (see sample below) which include each fact included on every tract in the Township Warrantee Maps: names of the warrantee and patentee; size of the tract; name of the tract, if given; dates of the warrant, survey, and patent; Survey Book and page number where the survey was recorded; Patent Register and page number where the patent was recorded; and, finally, the coordinates where the tract in question is located. Numerous footnotes give further information, including neighbors shown on surveys at the time the survey was conducted.  Some of these neighbors do not appear anywhere else in land records.

The warrantee maps show the location of the earliest landowners of the county—in other words, those who bought their land directly from the colony or state. After a tract was transferred to a private individual, subsequent transactions were recorded in the county courthouse. Each original Township Warrantee Map was painstakingly platted by draftsmen from the original warrants, surveys, and patents on file in Harrisburg.

The draftsmen at the Pennsylvania Land Office used the Warrant and Patent Registers to create the Warrantee Maps. They searched each county and parent county, then each alphabetical section chronologically, in the set of 67 county Warrant Registers plus 3 pre-1733 ledgers called First Landowners of PA: Colonial and State Warrant Registers in the PA Archives, Harrisburg, 1682-ca 1940 ($35) which can now be saved to your computer. (Free images  are also posted on the Pennsylvania State Archives website where each page of each county’s ledger is a separate pdf file).  The Pennsylvania State Archives has posted the online survey books (both front and back side of each survey have been digitized) and you can order copies of the original documents from the Pennsylvania State Archives in Harrisburg using their order form.   The draftsmen also searched Pennsylvania’s index to Patent Registers ($35). Within an index covering the relevant years, the names are grouped alphabetically by the first letter of the patentee’s surname, then grouped by volume number of Patent Book, and finally arranged chronologically by date of patent. Thus, the entire alphabetical section must be searched (which may be as little as one page to as many as 50) so as not to miss anyone.

The maps show precise outlines in metes and bounds of each original tract and all surrounding tracts in the township, making it possible to locate allied families, baptismal sponsors, neighbors, fellow church members, and migration companions. If your ancestor was actually a first landowner in the county, purchasing his or her property directly from the colony or state of Pennsylvania, you should find him or her in this atlas. Likewise, if your ancestor was a neighbor to one of these tracts, you may find his or her name in the numerous footnotes included in this volume.

Before your buy our Atlas of Dauphin County tracts, see if the name(s) you are looking for appear in index of the 638-page Atlas. To see if they appear in individual township chapters (downloadable as individual pdf files), click on “Index to Individual Township Chapters by TOWNSHIP,” or to see the index by neighborhood, click on “Dauphin County Index by NAME” (click to enlarge; free and downloadable).

Using the entry above for Peter Wingert in our East Hanover Township chapter, the chart shows his 398-acre tract which he warranted 3 Apr 1794 is located on the township map at coordinates E-1, F-1. Nearly all of the individual loose surveys were gathered together and copied into ledgers early in the 20th century.  To find the Survey Book and page number, consult the “Survey Book” column in this atlas and then access the online survey in Survey Book D1, pg. 113 (see Copied Survey Books“).

INDIVIDUAL TOWNSHIPS (each with index; page numbers include intro)​

As we have done for numerous Pennsylvania counties, we are posting completely free, downloadable township images from the The Combination Atlas Map of Dauphin County, Pennsylvania Compiled, Drawn and Published From Personal Examinations and Surveys By Everts & Stewart (Philadelphia, 1875). We hope that you will find this atlas a useful tool for when coupled with the 1860, 1870 and 1880 census and published county histories (see links below township maps). 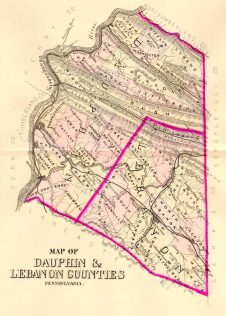 Click on the township of your choice below. Once the images are loaded, they can be enlarged by clicking on them. If an image doesn’t enlarge, right-click on it and choose “Open Image in New Tab.” When it is opened in a new tab, you will be able to zoom in.

Be sure to see Commemorative Biographical Encyclopedia of Dauphin County, Pennsylvania which may be saved to your computer as a pdf document. are also available online. Also check out Rupp’s 1846 History and Topography of Dauphin, Cumberland, Franklin, Bedford, Adams, and Perry Counties.