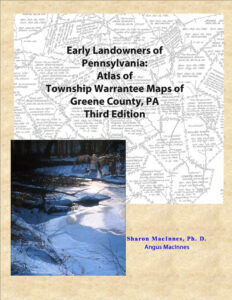 Original Land Owners: On this page, you will find the latest revision (2020) of our atlas (first published in 2008) and its individual chapters for sale, showing the metes-and-bounds tracts of the very first owners of land in Greene County.

The atlas contains all of the Township Warrantee Maps which are on file at the Pennsylvania Archives in Harrisburg, thus pinpointing the location of the earliest landowners in the county. The draftsmen at the Pennsylvania Land Office painstakingly platted each original tract into current township boundaries using the Warrant and Patent Registers to create the Warrantee Maps. They searched each county and parent county, then each alphabetical section chronologically, in the set of 67 county Warrant Registers plus 3 pre-1733 ledgers called First Landowners of PA: Colonial and State Warrant Registers in the PA Archives, Harrisburg, 1682-ca 1940 ($35) which can now be downloaded and saved to your computer. (Free images  are also posted on the Pennsylvania State Archives website where each page of each county’s ledger is a separate pdf file).  The Pennsylvania State Archives has posted the free online surveys (check both front and back sides) and you can order copies of the original documents from the Pennsylvania State Archives in Harrisburg using their order form.   The draftsmen also searched Pennsylvania’s index to Patent Registers ($35). Within an index covering the relevant years, the names are grouped alphabetically by the first letter of the patentee’s surname, then grouped by volume number of Patent Book, and finally arranged chronologically by date of patent. Thus, the entire alphabetical section must be searched (which may be as little as one page to as many as 50) so as not to miss anyone.

The draftsmen, however, did not include the survey book and page number, so we recently added this information by looking up each tract in county Warrant Registers. We also added extensive footnotes giving further information, including neighbors shown on surveys at the time the survey was conducted.  Some of these neighbors do not appear anywhere else in land records, and their appearance as a neighbor may be the only reference to their existence.  We also added numerous reference notes from Greene County history references and included an everyname index.

This Greene County atlas contains one chapter for each township, the plats being warranted as early as 1769 and as late as the 1920s.  Each chapter begins with the Township Warrantee Map.  This is followed by the same map, cropped to eliminate marginal information and superimposed with an atlas coordinate grid. The maps are followed by charts containing all of the information we were able to find for each plat.   We added numerous reference notes from Greene County history references and included an everyname index.

Before your buy our Atlas of Greene County, see if the name(s) you are looking for appear in the index of the 343-page atlas. To see if they appear in individual township chapters (downloadable as separate pdf files), click on Index to Individual Greene Co. Township Chapters by NAME. To see the index by neighborhood, click on  Index to Individual Township Chapters by TOWNSHIP.

As mentioned above, nearly all of the individual loose surveys were gathered together and copied into ledgers early in the 20th century, and we are indeed fortunate that the Pennsylvania Archives, under the direction of Jonathan Stayer, has posted these “Copied Survey Books” online. To find the Survey Book and page number, consult the “Survey Book” column in this atlas (for example, the “Survey Book” entry for John Bradford of Green Township in the page below, C19-34, indicates the survey was recorded in Survey Book C19, pg. 34, which can be seen using the “Copied Survey Books” link above).   Using the same entry above for John Bradford, the chart shows his tract as #21 on the East Hanover (Dauphin County) map located at coordinates B-4, C-4  (click on image for further information).  Remember that once the land was transferred from the government to private individuals, all subsequent sales were recorded in the Greene County Courthouse in Waynesburg.