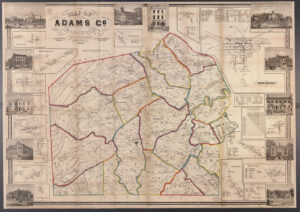 Original Land Owners: Our goal at Ancestor Tracks is to publish maps and land ownership information allowing genealogy researchers to place more precisely the locations where our ancestors lived.

The only way to find the date, book and page of the original warrant, survey, and patent for your ancestor is to do what the state draftsmen did to create their warrantee maps.  They searched through the relevant county Warrant Register, and that of its parent counties, now posted on the Pennsylvania State Archives website where each page of each county’s ledger is a separate pdf file, or download and save to your computer the entire set of 67 county Warrant Registers plus 3 pre-1733 ledgers called First Landowners of PA: Colonial and State Warrant Registers in the PA Archives, Harrisburg, 1682-ca 1940 ($35).   Once you have found the information, you can access the free online surveys, and you can order copies of the original documents from the Pennsylvania State Archives in Harrisburg using their order form.

The “Manor of Maske” which was a 43,500-acre original manor owned by the Penns, was distributed to 333 original settlers. The Manor or Maske–Its History and Individual Properties, by Charles H. Glatfelter and Arthur Weaner (1992, paperback, 74 pages) and the manor’s Connected Draft Survey Map (36″ X 48″) are available from the Adams County Historical Society, PO Box 4325, Gettysburg, PA 17325 (Email: info@achs-pa.org; Telephone: (717) 334-4723; Fax: (717) 334-0722).  Also check out the Emmitsburg (MD) Area Historical Society for their extensive work regarding land tracts which abut the Adams Co., PA/Frederick Co., MD border.

Over many years, Rev. Neal Hively painstakingly created connected draft maps of the original owners of land in two counties (York and Adams), thus performing a priceless service for genealogists. These maps show the boundaries of the tracts on topographic maps, warrantees of the tracts, and the survey number of each.  Rev. Hively tells me that he has retired and transferred his Adams County stock and copyright to Adams County Historical Society, Gettysburg, PA.  Some libraries, including the Library of Congress and the DAR Library in Washington, D.C., have his publications which should not be missed if you have early ancestors in Adams County.

19th-Century Residents:
In lieu of being able to bring you Township Warrantee Maps of the earliest settlers, we are posting, the Map of Adams Co., Pennsylvania from surveys by G.M. Hopkins which was published in 1858. This map is located in the Library of Congress Geography and Map Division Washington, D.C. We hope that it will be a useful tool for locating your Adams County families when coupled with the 1860 census. If your ancestor was actually a first landowner, purchasing his or her property from the colony or state of Pennsylvania, further information about these tracts may be gleaned from the York (created in 1749) or Adams County (created in 1800 from York) Warrant Registers. 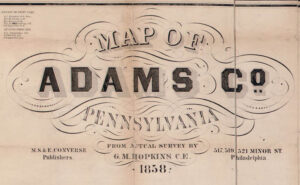 Use the 1858 atlas in conjunction with the excellent 1886 History of Cumberland and Adams County, Pennsylvania which is online courtesy of the Internet Archive. Also check out Rupp’s 1846 The History and Topography of Dauphin, Cumberland, Franklin, Bedford, Adams, and Perry Counties.