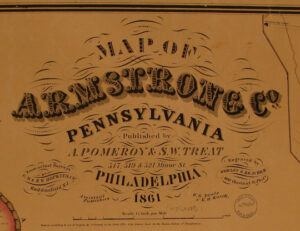 Original Land Owners: The state of Pennsylvania began platting the exact metes-and-bounds tracts of the earliest landowners, township-by-township, starting in 1907, but the Land Office only completed about 1/3 of the state before the project ended. Unfortunately, Pennsylvania did not plat the tracts of the earliest landowners of Armstrong County. However, we are incredibly lucky that a dedicated individual, Herbert Eckman, has undertaken the difficult task of mapping the tracts of Armstrong Co. warrantees and patentees and has posted them free of charge. To date, he has completed the townships of Bethel, Burrell, Cowanshannock, Gilpin, Kiskiminetas, Kittanning, Manor, Parks, Plum Creek and South Bend. Kudos for this momentous work, Herbert!

Outside of Herbert’s work, the only way to find the date, book and page of the original warrant, survey, and patent for your ancestor is to do what the state draftsmen did to create their warrantee maps.  They searched through the relevant county Warrant Register, and that of its parent counties, now posted on the Pennsylvania State Archives website where each page of each county’s ledger is a separate pdf file, or download and save to your computer the entire set of 67 county Warrant Registers plus 3 pre-1733 ledgers called First Landowners of PA: Colonial and State Warrant Registers in the PA Archives, Harrisburg, 1682-ca 1940 ($35).  Keep in mind the changing boundaries: southern Armstrong County was originally part of Cumberland County (created in 1750), then it became part of Bedford County (created in 1771), then it was part of Westmoreland County (created in 1773). Southern Armstrong County remained part of Westmoreland County until Armstrong Co. was created in 1800. Northern Armstrong Co. was annexed to Northumberland County in 1785 and was then transferred to Lycoming Co. in 1795 until, again, Armstrong Co. was created in 1800. These dates are important, as the earliest land warrants were filed under the county as it existed at the time the warrant was issued.

Once you have found the information, you can access the free online surveys, and you can order copies of the original documents from the Pennsylvania State Archives in Harrisburg using their order form.

Alternately, your ancestor may have filed a New Purchase Application ($15).  You can learn much more about the entire land acquisition process here.

The county was definitely being settled well before it was incorporated.

How early was Armstrong County actually settled? The following is taken from Smith’s History of Armstrong County Pennsylvania: “William Findley, in his history of the Whiskey Insurrection, says: ‘The western and southwestern portions of what is now Westmoreland, and the southeastern part of what is now Armstrong, were settled about the year 1769, the next year after the proprietary of Pennsylvania had purchased the country from the Indians as far west as the Allegheny and Ohio rivers.’ In 1769 the land office, for the sale or location of the lately purchased land, was opened. Several thousands of locations were applied for on the first day. The settlement on the east side of the Monongahela and Allegheny was very rapidly extended from the Monongahela forty miles northward, as far as Crooked creek, and the first settlers were generally a more sober, orderly people than commonly happens in the first settlement of new countries.”

Note, though, that although the land was purchased, it seems that few families moved to their tracts until later. Smith continues, “At that time all of Pennsylvania west of the western boundary of Lancaster was in Cumberland county. Whatever people had then settled in what is now Armstrong county must have been few. Among the petitions sent to Gov. Penn, in 1774, from inhabitants near Hanna’s Town, imploring protection and relief, it was, among other things, set forth that the petitioners were rendered very uneasy by the order of removal of the troops, that had been raised for their general assistance and protection, ‘to Kittanning, a place at least twenty-five or thirty miles distant from any of the settlements,’ and that it was theirs, ‘as well as the general opinion, that removing the troops to so distant and uninhabited a part of the province as Kittanning is, cannot answer the good purposes intended, but seems to serve the purposes of some who regard not the public welfare.'” See the 1883 history by Smith (above) for more.

Another version of the Pomeroy map is in the Leventhal Map Collection at Boston Public Library. Click on it to open it and then zoom with your cursor.

Also of particular use to researchers using Smith’s History of Armstrong County Pennsylvania is the pdf downloads of First Landowners of Pennsylvania: Indexes to Tract Names of Patented Land in the PA Archives, Harrisburg, ca 1684-1811 ($25) since Smith often refers to the name of a tract purchased by a settler.  The Tract Name Indexes give the warrantee and patentee names, the size of the tract, the date of the warrant, and the date, book and page number for the patent. This register would be useful to researchers who come upon references such as the following from Smith regarding tracts in Manor Township: “…the Alexander Hunter tract, called “Mahogany,” seated by Jacob Hileman; the John Smith tract, called “Maria’s Choice,” “situate on the Kittanning path,” 411 1/4 acres, partly in Kittanning township, seated by Joseph and Tobias Stiveson; the Michael Mechling tract, called “Mechlingburgh,” 105 acres and 59 perches, seated by Jacob Wilyard; the John Gray tract, 280 acres, seated by Jacob Wilyard; the Rebecca Smith tract, 390.0 acres, seated by Thomas McMasters; the James Glentworth tract, called “Glentworth Park,” 415 acres, seated by David McKelvy; and the Robert Davidson tract, 430.9 acres, seated by James Dougherty and John Truby….”

If these images don’t enlarge, right-click on the image and choose “Open Image in New Tab.” When they are opened in a new tab, you will be able to zoom in. You can also save the images.

While the map in the Library of Congress, is in the public domain the images we have taken belong to us and are not to be used for commercial use. For those wishing to use them for personal use (including illustrating a family history you are working on), we give permission to use them, but we would appreciate attribution to Ancestor Tracks. It takes much time and effort to locate, process, edit, and post these and the many other county images we have posted, so appreciate this courtesy.