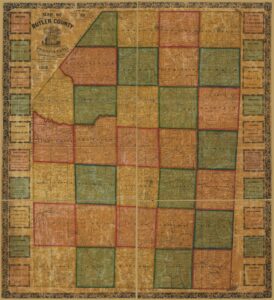 The land within Butler County was part of the Purchase of 1784, or the “Last Purchase,” through which the Iroquois Confederacy gave up their claims through the Treaty of Fort Stanwix. Much of Butler County was set aside for Depreciation Land (see the explanation of, and links to, Depreciation Land and relevant records on our Land Acquisition page under “Revolutionary War and Donation and Depreciation Land”). In contrast to the process used previously, the Land Office surveyed rectangular or square tracts before it was offered for sale.

If your ancestor was actually a first landowner, purchasing his or her property from the colony or state of Pennsylvania, further information about these tracts may be gleaned from the Last Purchase Register and/or the Warrant and Patent Registers of Butler County and its parents: Westmoreland Co. (created in 1773) and Allegheny Co. (created in 1788 from Westmoreland and Washington) or Butler County (created in 1800 from Allegheny County).  Many settlers arrived in this area before 1802 when Butler County was formed and its Warrant Register set up, so all of these county registers, or ledgers, should be checked for land transactions. See our explanation of how land was transferred from the government to individual owners from the earliest days of settlement.

The only way to find the date, book and page of the original warrant, survey, and patent for your ancestor is to search through the Warrant Registers on the Pennsylvania State Archives website where each page of each county’s ledger is a separate pdf file, or download and save to your computer the entire set of 67 county Warrant Registers plus 3 pre-1733 ledgers called First Landowners of PA: Colonial and State Warrant Registers in the PA Archives, Harrisburg, 1682-ca 1940 ($35).   Once you have found the information, you can access the free online surveys, and you can order copies of the original documents from the Pennsylvania State Archives in Harrisburg using their order form.

Be sure to go to the excellent site at the USGenWeb Project for Butler County. This is a quality site which has also posted images from the 1858 map which we are posting alternate images of below, as well as the Atlas of 1874. Also see their “Land Warrants & Patents” page for Warrants prior to 1802, and their wonderful transcriptions of both the 1883 History of Butler County Pennsylvania and the 1895 History of Butler Co.,PA. Kudos to the many volunteers who participated in these tasks! 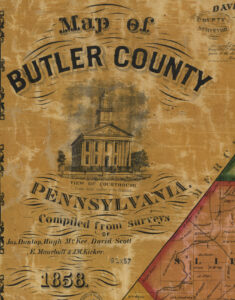 Click on the title above to see an 1872 map of Lawrence, Mercer, Beaver, and Butler