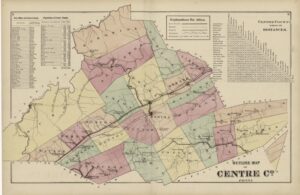 Original Land Owners: Over many years, Edward J. Heary painstakingly created connected draft maps of the original owners of land in three counties in central Pennsylvania (Centre, Clearfield and Clinton), thus performing a priceless service for genealogists. These maps show the boundaries of the tracts on topographic maps, warrantees of the tracts, and the survey number of each.  The Centre Co. Genealogical Society has published his work as “The Warrant Map of Centre County, Pennsylvania” with an accompanying CD containing the images for the entire county (sold as a set; $24 for members of the society, $30 for non-members).  They have also published an invaluable volume of early church records that has includes baptisms of many first landowner families: Brush Valley Names “The Matricul”: Union Church, Rebersburg, 1792-1855 which can be ordered at the same site.

Mr. Heary used the Warrant and Patent Registers to create the Warrantee Maps. It was a massive job to search each county and parent county, then each alphabetical section chronologically, in the set of 67 county Warrant Registers plus 3 pre-1733 ledgers now downloadable and called First Landowners of PA: Colonial and State Warrant Registers in the PA Archives, Harrisburg, 1682-ca 1940 ($35). (Free images  are also posted on the Pennsylvania State Archives website where each page of each county’s ledger is a separate pdf file).

He also searched Pennsylvania’s index to Patent Registers ($35). Within an index covering the relevant years, the names are grouped alphabetically by the first letter of the patentee’s surname, then grouped by volume number of Patent Book, and finally arranged chronologically by date of patent. Thus, the entire alphabetical section must be searched (which may be as little as one page to as many as 50) so as not to miss anyone.

Once you have the survey book and page number, go to the actual survey which the Pennsylvania Archives has posted online.  You can order copies of the original documents from the Pennsylvania State Archives in Harrisburg using their order form.  Please note that these land transfers predate the deed books located in each county because they deal with the first transfer of land to private individuals at the state level.  Once the land passed into the hands of a private owner, any subsequent transfer of the land was recorded as deeds in the county courthouse as it existed at that time.

19th-Century Residents:  For researchers using the 1860 census, we are posting images from the 1861 Topographical Map of Centre Co. Pennsylvania from Actual Surveys under the direction of H. F. Walling Published by S. D. Tilden which is located in the Map Room of the Library of Congress. Another copy of this map is also posted online by Penn State University . The map in the Library of Congress was in poor shape in a number of places and we had to piece it together. In cases where our images may be deficient, go to the Penn State site. Navigation of this excellent map on this site is a bit tricky, but you can also access each township or borough independently. Additionally, Penn State University has also posted the 1874 Pomeroy Atlas of Centre County, Pennsylvania.

Continuing below, we are posting illustrations from the 1883 History of Centre and Clinton Counties by John Blair Linn. 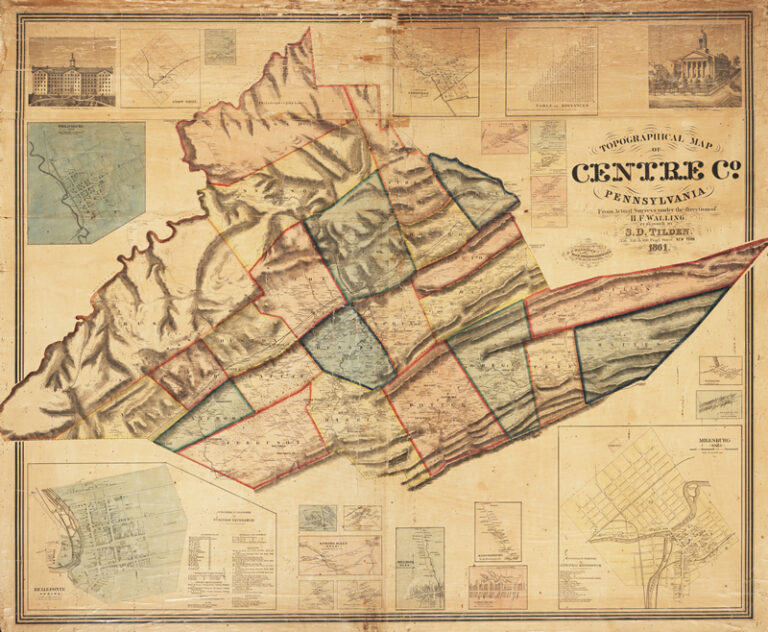 While the map in the Library of Congress, is in the public domain the images we have taken belong to us and are not to be used for commercial use. For those wishing to use them for personal use (including illustrating a family history you are working on), we give permission to use them, but we would appreciate attribution to Ancestor Tracks. It takes much time and effort to locate, process, edit, and post these and the many other county images we have posted, so we appreciate this courtesy. If you use them, please attribute them to Ancestor Tracks.

Maps from Linn & Other Sources