Original Land Owners: Unfortunately, the state of Pennsylvania did not plat the original warrantees and patentees on township maps, so there will be no volume regarding Chester Co. joining the Early Landowner series. However, a 1683 map of landowners was published in Henry Ashmead’s Historical Sketch of Chester, On Delaware with Maps and Illustrations (Chester, PA: Republican Steam Printing House, 1883).

The only way to find the date, book and page of the original warrant, survey, and patent for your ancestor is to do what the state draftsmen did to create their warrantee maps of other counties.  They searched through the relevant county Warrant Register, and that of its parent counties, now posted on the Pennsylvania State Archives website where each page of each county’s ledger is a separate pdf file, or download and save to your computer the entire set of 67 county Warrant Registers plus 3 pre-1733 ledgers called First Landowners of PA: Colonial and State Warrant Registers in the PA Archives, Harrisburg, 1682-ca 1940 ($35).   Once you have found the information, you can access the free online surveys, and you can order copies of the original documents from the Pennsylvania State Archives in Harrisburg using their order form.

Check the Chester County Historical Society, the Tri-County Heritage Society, and Chester County Archives & Records Services for copies. These maps show the tracts according to metes and bounds and include the survey numbers so that the original surveys can be obtained from the Pennsylvania Archives in Harrisburg. 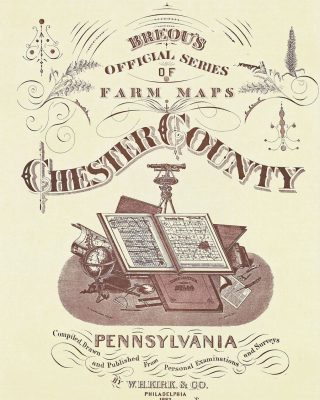 See the unparalleled 1777 Chester County Property Atlas project  by the Chester County Archives, along with their 1777 Atlas Landowner Key. This amazing site contains a plethora of information on men and properties of Chester County during the Revolutionary War. As their website states:

“One of the defining moments in Chester County’s long history occurred on September 11, 1777 along the Brandywine Creek in the southern part of the county. Long-time residents or general history enthusiasts may be familiar with the story—General George Washington’s Continental Army stood between the rebel capital of Philadelphia and General William Howe’s advancing British Army. Capturing Philadelphia would deliver a crushing moral and tactical blow to the American war effort, and Howe wanted a quick and decisive end to the rebellion. To prevent the British from reaching Philadelphia, Washington fortified various fords along the eastern side of the Brandywine. He expected Howe to press forward using the Nottingham Road in a direct attack, therefore Washington concentrated the bulk of his army near John Chads’s ford….For example, in 1771, residents of West Bradford Township petitioned the Chester County Court of Quarter Sessions to lay out a road beginning “In the line of Samuel Hunt’s land in the Lancaster Road,” and ending “In the road near Stephen Harlan’s corner.” They did not use official road names but rather the names of property owners. Therefore, to map the network of 1777 roads surrounding the battlefield, Archives staff had to first map property owners in each township being studied by the grant. This is how the mapping project was born. While the focus of the American Battlefield Protection grants extended beyond the battlefield itself to include troop movements throughout the county, the ultimate goal is to create a county-wide atlas featuring all 1777 property owners and roads. Because mapping a township can take a long time, there is no expected end date for this project.”