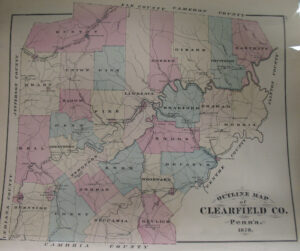 Original Land Owners: The state of Pennsylvania began platting the exact metes-and-bounds tracts of the earliest landowners, township-by-township, starting in 1907, but the Land Office only completed about 1/3 of the state before the project ended.

Unfortunately, Pennsylvania did not plat the tracts of the earliest landowners of Clearfield County. However, a very industrious surveyor named Ed Heary completed an excellent map of the earliest landowners which we are posting below. Edward J. Heary painstakingly created connected draft maps of the original owners of land in three counties in central Pennsylvania, thus performing a priceless service for genealogists. The project, which included mapping Clearfield, Centre and Clinton Counties, took him many years to accomplish.  We purchased his maps from Mr. Heary and it is our pleasure to present images of his maps below.  They are large images–each of them was originally about 3 feet X 4.5 feet–and may take some time to load.  There is no index yet to the Heary maps of Clearfield County, but taking time to search the images can yield a great deal of information about the earliest settlers.  We are publishing them with his permission, and those researchers with ancestors in Clearfield may want to drop him a note expressing appreciation for this momentous work!

Clearfield County was formed from Lycoming and Huntingdon Counties in 1804 but its boundaries changed several times before that.  The southern portion was part of Cumberland County (1750-1771) then part of Bedford County (1771-1787), then part of Huntingdon County (1787-1804).  The northern part of Clearfield County was annexed to Northumberland County in 1785, then became part of Lycoming  (1795-1800).  These dates matter because your ancestor’s records may be in any one of these counties depending on when he received his land.

You can glean much more information by using the Warrant and Patent Registers to find the date, book and page of the original warrant, survey, and patent for your ancestor.  Search through the relevant county Warrant Register, and that of its parent counties, now posted on the Pennsylvania State Archives website where each page of each county’s ledger is a separate pdf file, or download and save to your computer the entire set of 67 county Warrant Registers plus 3 pre-1733 ledgers called First Landowners of PA: Colonial and State Warrant Registers in the PA Archives, Harrisburg, 1682-ca 1940 ($35).   Once you have found the information, you can access the free online surveys, and you can order copies of the original documents from the Pennsylvania State Archives in Harrisburg using their order form.  On Mr. Heary’s maps, you will see a hyphenated entry such as A19-121. This refers to the the Survey Book (A19) and page number (121).

Please note that these land transfers predate the deed books located in each county because they deal with the first transfer of land to private individuals at the state level.

19th-Century Residents:  We are posting free, downloadable images from Caldwell’s Illustrated Historical Combination Atlas of Clearfield County, Pennsylvania published by Caldwell in 1878. We hope they will be useful for pinpointing the whereabouts of residents in the 1850-1880 census records and those mentioned in History of Clearfield County, Pennsylvania by Lewis Cass Aldrich (1887). Another excellent resource for Clearfield is Twentieth Century History of Clearfield County, Pennsylvania, and Representative Citizens by Roland D. Swoope, Jr., 1911, and it appears that the full text has been placed online at Clearfield County PAGenWeb Archives by Judy Banja and Sally & Claire White. What a wonderful contribution to genealogy! Also, a downloadable copy of the entire book is online. Furthermore, the Clearfield County Genealogy Project hosted by Shirley Pierce and Nathan Zipfel has posted online another book, Clearfield County, Pennsylvania: Present and Past by Thomas Lincoln Wall, published in 1925. The 1878 atlas which we are posting below is located in the Library of Congress. While the physical maps are in the public domain, the images that we have personally taken at the Library of Congress belong to us and are not to be used commercially. If you wish to use them for personal use (including illustrating a family history you are working on, or including one on your personal web page for which you do not charge), you may use them freely.  NOTE: We posted these images about 15 years ago and now find that the entire atlas, complete with lithographs of individual farm and business owners, has been posted by Ellis Michaels through the Pennsylvania GenWeb Archives.  These are much better images than the ones we posted below which we’re leaving online.  Well done, Mr. Michaels! 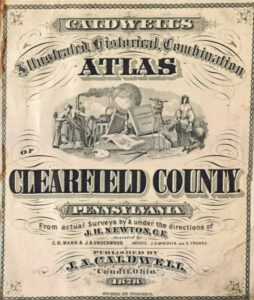