Original Land Owners:  The state of Pennsylvania began platting the exact metes-and-bounds tracts of the earliest landowners, township-by-township, starting in 1907, but they did not do a project for Clinton County. However, we are indeed fortunate that a private individual has given researchers a gift of his talent. Over many years, Edward J. Heary has painstakingly created connected draft maps of the original owners of land in three counties (Centre, Clinton and Clearfield) in central Pennsylvania, thus performing a priceless service for genealogists. These maps show the boundaries of the tracts on topographic maps, warrantees of the tracts, and the survey number of each, so that the original surveys can be obtained from the Pennsylvania Archives in Harrisburg.  See our explanation of how land was transferred from the government to individual owners from the earliest days of settlement.

Keep in mind that Clinton County was originally part of Cumberland County (1750-1771), then parts it were included in Bedford, Northumberland, Mifflin, Lycoming, and Centre Counties.

If your ancestor was actually a first landowner, purchasing his or her property directly from the colony or state of Pennsylvania, further information about these tracts may be gleaned from the Clinton County and its parent counties’ Warrant Registers and Patent Registers on file at the Pennsylvania Archives in Harrisburg. The only way  to find the date, book and page of the original warrant, survey, and patent for your ancestor is to search through those county Warrant Registers on the Pennsylvania State Archives website where each page of each county’s ledger is a separate pdf file, or download and save to your computer the entire set of 67 county Warrant Registers plus 3 pre-1733 ledgers called First Landowners of PA: Colonial and State Warrant Registers in the PA Archives, Harrisburg, 1682-ca 1940 ($35).   Once you have found the information, you can access the free online surveys, and you can order copies of the original documents from the Pennsylvania State Archives in Harrisburg using their order form.

19th-Century Residents:  For researchers using the 1850-1880 census, we are posting images from the 1862 Map of Clinton County, Pennsylvania from Actual Surveys under the Direction of H. F. Walling drawn by F. W. Beers which is located in the Map Room of the Library of Congress.  Be sure to refer to these maps as you consult these downloadable county histories: (1) Daniel Rupp’s 1847 History and Topography of Northumberland, Huntingdon, Mifflin, Centre, Union, Columbia, Juniata and Clinton Counties; (2) D.S. Maynard’s 1875 Historical View of Clinton County: From its Earliest Settlement to the Present Time; (3) John Blair Linn’s 1883 History of Centre and Clinton Counties, Pennsylvania; and (4) J. Milton Furey’s 1892 Historical and Biographical Work: or, Past and Present of Clinton County. 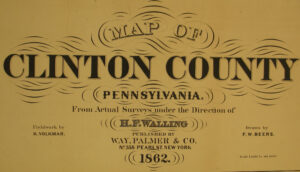 Note that several townships have changed shapes or names since this map was published in 1862. The 1883 map above is an intermediate map drawn between the 1862 landowner map and today’s township maps.