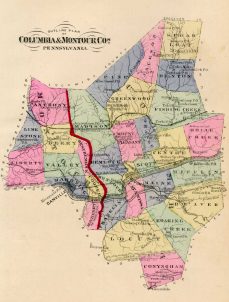 Original Land Owners: The state of Pennsylvania began platting the exact metes-and-bounds tracts of the earliest landowners, or warrantees and patentees, starting in 1907.  However, the Land Office only completed about 1/3 of the state before the project ended.

Fortunately, although the Land Office did not complete a warrantee map for Columbia County, a surveyor did complete a rough draft of approximately 90% of the original tracts of the county, creating one map for the northern section of the county and another for the southern portion (see below). Only the names of the warrantees are found on the two maps , which are faded, in poor condition, and illegible in small areas. As a service, we are posting the best copies available of both of the drawings which are in the Pennsylvania Archives in Harrisburg. We are also posting a more detailed warrantee tract map which the draftsman created for parts of today’s Beaver, Mifflin, Roaring Creek, and Main Townships. These are the only large connected tract maps showing the original landowners of Columbia County in the Pennsylvania State Archives.

The rough maps we are posting below shows the first person who applied to the colony or state for the land.  See our explanation of how land was transferred from the government to individual owners from the earliest days of settlement.

The surveyors used the Warrant and Patent Registers to create the Warrantee Maps. They searched each county and parent county, then each alphabetical section chronologically, in the set of 67 county Warrant Registers plus 3 pre-1733 ledgers called First Landowners of PA: Colonial and State Warrant Registers in the PA Archives, Harrisburg, 1682-ca 1940 ($35) which can now be saved to your computer. (Free images  are also posted on the Pennsylvania State Archives website where each page of each county’s ledger is a separate pdf file).

The Pennsylvania State Archives has posted the online survey books (both front and back sides of each survey have been digitized) and you can order copies of the original documents from the Pennsylvania State Archives in Harrisburg using their order form.   The draftsmen also searched Pennsylvania’s index to Patent Registers ($35). Within an index covering the relevant years, the names are grouped alphabetically by the first letter of the patentee’s surname, then grouped by volume number of Patent Book, and finally arranged chronologically by date of patent. Thus, the entire alphabetical section must be searched (which may be as little as one page to as many as 50) so as not to miss anyone.

Keep in mind that  Columbia County was created in 1813 from Northumberland, and the portion of Northumberland which became Columbia was originally part of Berks and Northampton Counties until 1772. Thus, all of these counties should be checked for warrants, deeds and wills, etc., depending on when your ancestor settled here.  The details in the Warrant Register indexes include several pieces of extremely important information for genealogists: (1) the name of the warrantee; (2) size of the tract; (3) date of the warrant (or order which was issued by the colonial or state Land Office to have the tract surveyed for the warrantee); (4) date the survey was returned to the Land Office; (5) name of the patentee who received final title from the state after the survey was returned; (6) Warrant Register and page number where the warrant was registered; and (7) the Survey Book and page number onto which the original survey was copied.

After the title was transferred from the proprietors or the state government to private individuals (or patentees), all further land transactions were accomplished by deeds between two private parties, the grantor (seller) and grantee (buyer). These deeds are recorded at the county courthouses. Thus, if you find your ancestor’s name in the Warrant Registers held by the state Land Office, you will probably also find him or her entered into subsequent land transactions recorded in Deed Registers at the county level.

19th-Century Residents:  We are posting images from the 1876 Atlas of Columbia and Montour Counties (scroll down to the bottom of the page) which can be used with the 1860, 1870 and 1880 census records, as well as Battle’s 1887 History of Columbia & Montour Counties, Pennsylvania.  We hope that you will find this atlas a useful tool for when coupled with the 1860, 1870 and 1880 census and published county histories.  Also check out Cummings’ 1860 Map of Columbia and Montour Counties from the Leventhal Map Collection posted by Boston Public Library. If you click on the map it will open and then you can use your cursor wheel to zoom in and see every detail, including names of residents and locations of landmarks like churches and mills.

Atlas of Columbia and Montour Counties, 1876 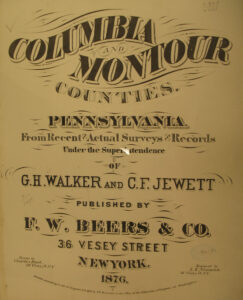