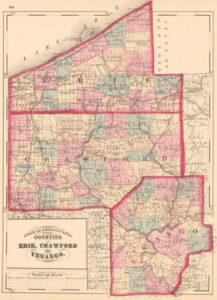 If your ancestor was actually a first landowner (warrantee or patentee), purchasing his or her property from the colony or state of Pennsylvania, his/her land acquisition should be documented at the state level, not at the county level. Crawford County was created in 1800, but was originally part of Allegheny County which was created in 1788. These dates are important, as the earliest land warrants were filed under the county as it existed at the time the warrant was issued.
The only way to find the date, book and page of the original warrant, survey, and patent for your ancestor is to search through those county Warrant Registers on the Pennsylvania State Archives website where each page of each county’s ledger is a separate pdf file, or download and save to your computer the entire set of 67 county Warrant Registers plus 3 pre-1733 ledgers called First Landowners of PA: Colonial and State Warrant Registers in the PA Archives, Harrisburg, 1682-ca 1940 ($35).   Once you have found the information, you can access the free online surveys, and you can order copies of the original documents from the Pennsylvania State Archives in Harrisburg using their order form.  Your ancestor may, alternatively, have received a Last Purchase or Donation Land Tract from the state.  See our explanation of how land was transferred from the government to individual owners from the earliest days of settlement.

19th-Century Residents:  We found an undated atlas published by J. C. McDowell of Dicksonburg, PA, in the files of the Pennsylvania State Archives in Harrisburg which appears to show at least some warrantees of larger tracts. It is not listed in United States Atlases: A List of National, State, County, City, and Regional Atlases in the Library of Congress but an online search indicates the images may be from an 1876 atlas. In any case, in lieu of being able to bring you Township Warrantee Maps of the earliest settlers, we are posting pages from what we believe is the Historical Atlas of Crawford County, Pennsylvania which show the residents of Crawford Co. at the date of printing, as well as some previous owners (warrantees or patentees?) of the larger original tracts. We apologize for the quality of the map–this is a copy of a copy. The penciled notations on some tracts almost certainly indicate the survey book and page number for the original tract. We hope that it will be a useful tool for locating your Crawford County families when coupled with the 1860, 1870, and 1880 census and published county histories such as Samuel Bates and Robert Brown’s 1885 History of Crawford County, Pennsylvania and McKnight’s 1905 A Pioneer Outline History of Northwestern Pennsylvania, Embracing the Counties of Tioga, Potter, McKean, Warren, Crawford, Venango, Forest, Clarion, Elk, Jefferson, Cameron, Butler, Lawrence, and Mercer.

An outstanding map showing landowners is the 1865 Map of Crawford County from Actual Surveys published by Pomeroy has been posted by the Library of Congress.

To see where the townships are in relation to each other, click here for the 1885 Map of Townships Crawford County from Beers 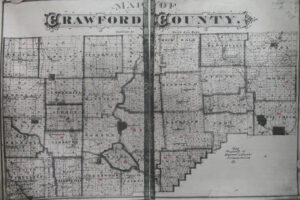 In the 1980s, reader Dick Johns was working for Crawford County 911 but there were no maps available that showed the local road names–only route numbers.  From 1985-1989, he created a map to aid emergency dispatchers and emergency responders in finding locations.  While it’s not really a “historic” map, it is very valuable for identifying roads in your research area.  He has given us permission to post the map so that you can refer to it, download it, and snip parts that may be useful to you.  Thank you SO much, Mr. Johns!  Read this article from 1990 from the Erie Times-News that will give you more information on Mr. Johns and his project. To enlarge the map and article, right-click and “open in new tab” and then use your magnifying glass.  If that doesn’t work to your satisfaction, try this link. (right-click and “open in new tab” and magnify).