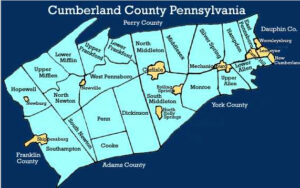 Warrantee Maps by Eschenmann and Barner

1872 Atlas of Cumberland Co. by Beers (scroll down)

The state of Pennsylvania began platting the exact metes-and-bounds tracts of the earliest landowners, township-by-township, starting in 1907, but the Land Office only completed about 1/3 of the state before the project ended. Unfortunately, Pennsylvania only platted one township within Cumberland County, East Pennsboro Township.

Researchers are indeed fortunate, however, that Hayes R. Eschenmann began to systematically research and map the tracts of the earliest landowners of the county, aligning their surveys with USGS topographic quadrangle maps. He published volumes for four quadrangles before his passing, and his project was taken up by his editor, Paul Barner, who completed the additional volumes. See our explanation of how land was transferred from the government to individual owners from the earliest days of settlement.

The Eschenmann and Barner pamphlets will probably give you enough data to access copies of the warrant, original survey, and patent in the Pennsylvania State Archives, but if you need to find the date, book and page of the original warrant, survey, and patent for your ancestor, you will need to search through the Cumberland County Warrant Register on the Pennsylvania State Archives website where each page of each county’s ledger is a separate pdf file, or download and save to your computer the entire set of 67 county Warrant Registers plus 3 pre-1733 ledgers called First Landowners of PA: Colonial and State Warrant Registers in the PA Archives, Harrisburg, 1682-ca 1940 ($35).   Once you have found the information, you can access the free online surveys, and you can order copies of the original documents from the Pennsylvania State Archives in Harrisburg using their order form.  Please note that these land transfers predate the deed books located in each county because they deal with the first transfer of land to private individuals at the state level.

47 volumes of First Families of Cumberland County have been published, each of which includes a 22″ X 30″ map showing the tracts, and they may be ordered for $18 each plus shipping and handling. The index to the volumes is available on this site, as well as a key to the Quadrangle abbreviations. The volumes available at Cumberland County Historical Society are:

An excellent 1858 Map of Cumberland County, Pennsylvania: from Actual Surveys published by H. F. Bridgens is posted through the Leventhal Map Collection at Boston Public Library. To see residents before the Civil War, click on it and zoom in with your cursor’s wheel to see names and locations. 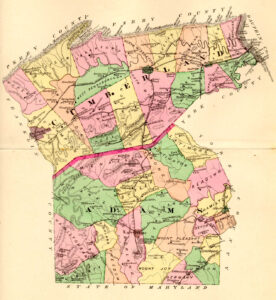 Use the 1872 atlas in conjunction with the excellent 1886 History of Cumberland and Adams County, Pennsylvania which is online courtesy of the Internet Archive. Also check out Rupp’s 1846 History and Topography of Dauphin, Cumberland, Franklin, Bedford, Adams, and Perry Counties.