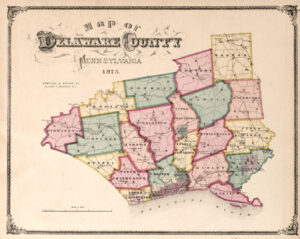 Although the state draftsmen working on the project to plat all of the earliest surveys on township maps never got around to mapping Delaware County, we are fortunate that Benjamin H. Smith took it upon himself to produce an atlas of the earliest patents in 1880. Many of these patents are dated before 1700. We are posting images of the copy of the atlas which is in the Library of Congress.  See our explanation of how land was transferred from the government to individual owners from the earliest days of settlement.

Mr. Smith clearly used the Warrant Registers at the Pennsylvania State Archives to create the Warrantee Maps. He searched each county and parent county, then each alphabetical section chronologically, in the set of 67 county Warrant Registers plus 3 pre-1733 ledgers now available as digital downloads called First Landowners of PA: Colonial and State Warrant Registers in the PA Archives, Harrisburg, 1682-ca 1940 ($35) which can be downloaded and saved to your computer. (Free images  are also posted on the Pennsylvania State Archives website where each page of each county’s ledger is a separate pdf file).

It does not appear Mr. Smith searched Pennsylvania’s index to Patent Registers ($35). Within an index covering the relevant years, the names are grouped alphabetically by the first letter of the patentee’s surname, then grouped by volume number of Patent Book, and finally arranged chronologically by date of patent. Thus, the entire alphabetical section must be searched (which may be as little as one page to as many as 50).

Please note that these land transfers predate the deed books located in each county because they deal with the first transfer of land to private individuals from Pennsylvania’s colonial or state government. Once the land passed into the hands of a private owner, any subsequent transfer of the land was recorded as deeds in the county courthouse as it existed at that time. 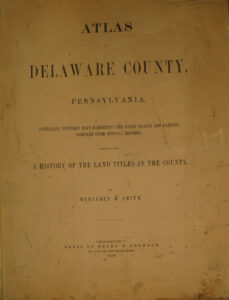 Also, Keith Lockhart maintains a particularly rich website devoted to many Delaware County resources–be sure to explore his heading “Maps” in additional to the “Genealogical Resources.” Nice job, Keith!