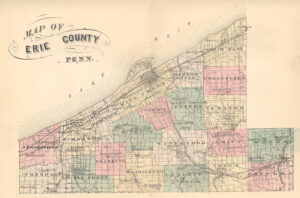 Our goal at Ancestor Tracks is to publish maps and land ownership information allowing researchers to place more precisely the locations where our ancestors lived.

The state of Pennsylvania began platting the exact metes-and-bounds tracts of the earliest landowners, township-by-township, starting in 1907, but the Land Office only completed about 1/3 of the state before the project ended. Fortunately, Erie County was completed and  the Pennsylvania State Archives has been so kind as to post these images online (scroll below for links to these Erie County Township Warrantee Maps).

Erie County has a storied history with dramatic twists.  It was part of the Last Purchase of 1784, and part of the Depreciation and Donation Lands.  It was disputed between New York, Pennsylvania, and the Six Nations.  Once it was opened for legal settlement (squatters had already settled there), speculators of the Holland Land Company and others bought up many warrants under fictitious names.  The southern portion of what would become Erie County was included in Northumberland County in 1788.

The Erie Triangle was claimed by Massachusetts, Connecticut and New York who gave up their claims to the federal government in the 1780s and it was added to Allegheny County, Pennsylvania, in 1792 after paying the Six Nations to relinquish their rights.  In 1799 survey districts were redrawn and new deputy surveyors were appointed to eliminate collusion between the former deputy surveyors and speculators.

After consulting the Last Purchase Register and Donation Land Register, the draftsmen at the Pennsylvania Land Office used the Warrant and Patent Registers to create the Warrantee Maps. They searched each county and parent county, then each alphabetical section chronologically, in the set of 67 county Warrant Registers plus 3 pre-1733 ledgers called First Landowners of PA: Colonial and State Warrant Registers in the PA Archives, Harrisburg, 1682-ca 1940 ($35) which can now be downloaded and saved to your computer. (Free images  are also posted on the Pennsylvania State Archives website where each page of each county’s ledger is a separate pdf file).  The Pennsylvania State Archives has posted the online survey books (both front and back side of each survey have been digitized) and you can order copies of the original documents from the Pennsylvania State Archives in Harrisburg using their order form.   The draftsmen also searched Pennsylvania’s index to Patent Registers ($35). Within an index covering the relevant years, the names are grouped alphabetically by the first letter of the patentee’s surname, then grouped by volume number of Patent Book, and finally arranged chronologically by date of patent. Thus, the entire alphabetical section must be searched (which may be as little as one page to as many as 50) so as not to miss anyone. 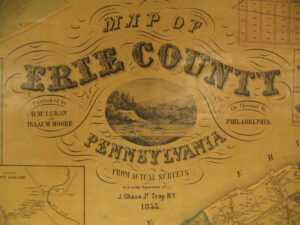 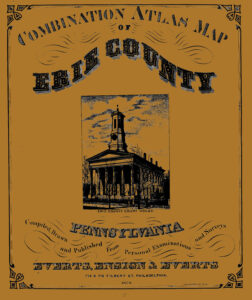