The colonial government under the Penns did not sell land until they received it through Indian treaties, and thus the land which would become Forest County was not available for purchase until the land was acquired through the Treaty of 1784 after the Revolutionary War. The vast area of northwest Pennsylvania was thus opened up for settlement through this “Last Purchase” and purchasers were entered into the Last Purchase Register. About 20 of today’s counties were originally part of this land. To learn about the Pennsylvania Land Acquisition process that England set up to distribute colonial land (which basically continues today), as well as the boundary disputes (between Pennsylvania and Maryland, Pennsylvania and Virginia, and Pennsylvania and Connecticut) and land opened through treaties with Indians, see our Land Acquisition page.

At first the price was set relatively high, and few tracts sold for that amount. In fact, a letter addressed by Benjamin Franklin to the Supreme Executive Council on 23 Feb 1787 says, “We are convinced that it will be of advantage to the State to lower the price of land within the late Indian purchase; only eight warrants have been taken out for lands these six months passed.” (Colonial Records, vol. xv., pg. 167). The price of the land was thus duly reduced, and it was again reduced in 1792 because sales were not increasing much. Finally, the lower price induced many large land purchasers to apply for huge tracts. The Holland Land Company under Wilhelm Willink and 7 others living in Holland, for example, purchased 1105 warrants of 900 acres each, meaning that they controlled nearly a million acres east of the Allegheny River. Herman LeRoy and Jan Lincklean who were also living in Amsterdam acquired 303 warrants of 900 acres, or 272,700 acres. James Wilson bought 510 warrants containing 900 acres each which totaled 451,000 acres. John Nicholson bought 300 warrants containing 1,000 acres each, for a total of 300,000 acres. Thomas M. Willing bought 311,000 acres; George Meade purchased 306,000 acres, etc.

Not all land, of course, was purchased by land speculators. If your ancestor was actually a first landowner, purchasing his or her property directly from the colony or state of Pennsylvania, further information about these tracts may be gleaned from the Warrant and Patent Registers of Forest County and its parent counties (Forest was originally part of Northumberland County, then Lycoming, and it became split between Lycoming and Venango Co. when Venango was created in 1800. When Jefferson Co. was created in 1804, Forest was split between Venango and Jefferson. The eastern half of the county was carved from Jefferson Co. in 1848 and given its own name, and the western half was carved from Venango and added to the original Forest County in 1866.) Since the first settlers of Forest County came here ca 1797, their records may be found in any of those warrant registers.

Please note that these land transfers predate the deed books located in each county because they deal with the first transfer of land to private individuals from Pennsylvania’s colonial or state government.

We are posting the Map of Forest County published by J.L. Smith in 1881 for use with the 1860-1880 censuses and county histories: the 1890 History of the Counties of McKean, Elk, Cameron, and Potter and McKnight’s 1905 A Pioneer Outline History of Northwestern Pennsylvania, Embracing the Counties of Tioga, Potter, McKean, Warren, Crawford, Venango, Forest, Clarion, Elk, Jefferson, Cameron, Butler, Lawrence, and Mercer.

Also see Gardiner’s 1881 Map of Warren and Forest Counties that has been posted by the Pennsylvania State Archives. 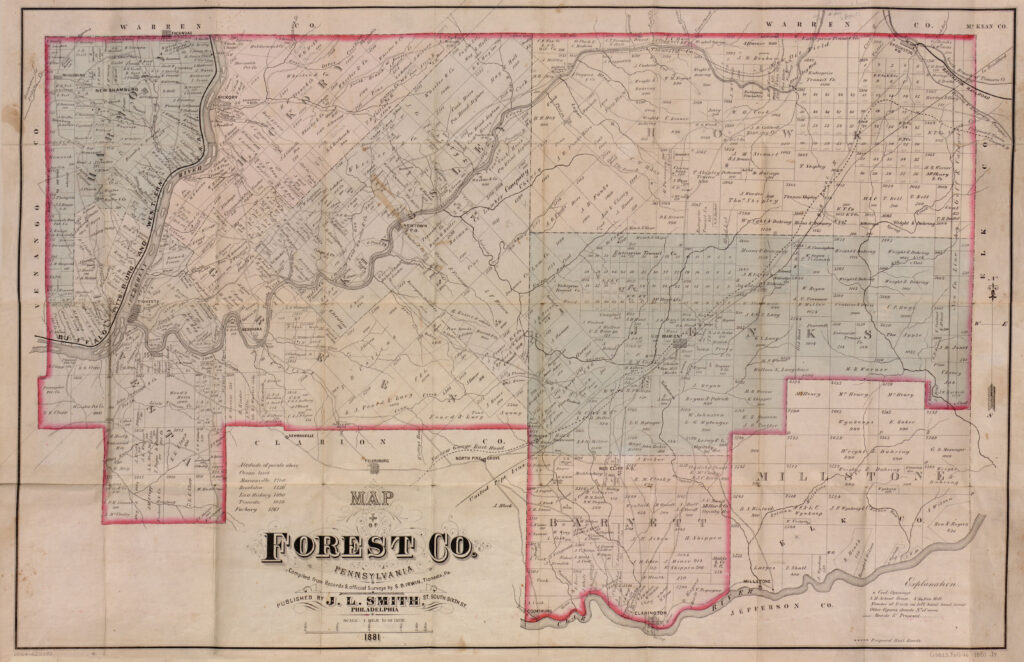