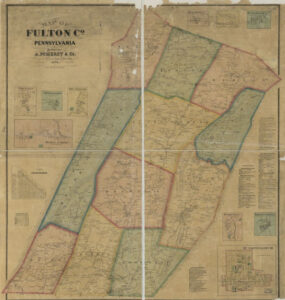 The state of Pennsylvania began platting the exact metes-and-bounds tracts of the earliest landowners, township-by-township, starting in 1907, but the Land Office only completed about 1/3 of the state before the project ended. Unfortunately, only part of Fulton County was mapped before the state project ended. Bill Turner, who has put an unparalleled amount of work into Fulton County genealogy, has produced a series of binders for each township called “Original Warrants, Patents & Drafts filed at Fulton County Courthouse” documenting the original documents filed at the Fulton Co. Courthouse in McConnellsburg. Contact the Fulton County Historical Society Library at P.O. Box 115, McConnellsburg, Pennsylvania 17233 (Email: director@fultonhistory.org) for a search of these binders.

We obtained a poor quality map from the Fulton County Historical Society showing the warrantees of Union Twp., most of Brush Creek Twp., and part of Bethel Township. This is a very large map (about 3′ X 6′) and will take time to download. You will find the Survey Book and page number on most tracts (usually starting with “C”). If you can’t zoom in, right-click on the image and “open in a new tab” and then zoom in with your cursor wheel.

Note: It appears that Dublin and Todd Townships were the only townships for which Commonwealth of Pennsylvania draftsmen connected the surveys and patents and created a complete Township Warrantee Map, and these warrantee maps have been posted online (see links below). If any researcher knows of additional land resources, please contact ancestortracks@gmail.com

If your ancestor was actually a first landowner in the county, purchasing his or her property from the colony or state of Pennsylvania, further information about these tracts may be gleaned from the count Warrant Registers and Patent Registers on file at the Pennsylvania State Archives in Harrisburg. The earliest land warrants were filed under the county as it existed at the time the warrant was issued.  Fulton was created from Bedford County in April 1850, so if your ancestor settled before that date, consult the Bedford County Warrant Register.  The only way to find the date, book and page of the original warrant, survey, and patent for your ancestor is to search through those county Warrant Registers on the Pennsylvania State Archives website where each page of each county’s ledger is a separate pdf file, or download and save to your computer the entire set of 67 county Warrant Registers plus 3 pre-1733 ledgers called First Landowners of PA: Colonial and State Warrant Registers in the PA Archives, Harrisburg, 1682-ca 1940 ($35).   Once you have found the information, you can access the free online surveys, and you can order copies of the original documents from the Pennsylvania State Archives in Harrisburg using their order form.

If you have 19th-century ancestors who lived in Fulton Co., see the 1916 Atlas of Fulton County, Pennsylvania compiled and published by Frank P. Plessinger, County Surveyor, Locust Grove, PA. and Francis M. Taylor, C.E., McConnellsburg, PA., 1916, which has been posted online at the USGenWeb Digital Map Library. Use these images in conjunction with the downloadable county histories: Rupp’s 1846 History and Topography of Dauphin, Cumberland, Franklin, Bedford, Adams, and Perry Counties; the 1884 History of Bedford, Somerset and Fulton Counties, Pennsylvania;  and John Jordan’s 1913 A History of the Juniata Valley (Volume I and Volume II and Volume III).