The state of Pennsylvania began platting the exact metes-and-bounds tracts of the earliest landowners, township-by-township, starting in 1907, but the Land Office only completed about 1/3 of the state before the project ended.

Unfortunately, Pennsylvania did not plat the tracts of the earliest landowners of Northampton County.  We are incredibly fortunate, however, that James B. Wolfson of Fresno, CA, spent a number of years documenting the warrantees and patentees of the townships of Lebanon County. He published his research in a series of excellent short booklets, one for each township, which the serious researcher of early landowners of the area simply must not ignore. Each of his booklets includes a map drawn by Mr. Wolfson showing the original tracts, as well as charts documenting the warrantee and patentee of each tract; the size and name of the tract; the warrant, survey and patent dates; and the survey book and page number where the surveys are recorded.

Mr. Wolfson also searched Pennsylvania’s index to Patent Registers ($35). Within an index covering the relevant years, the names are grouped alphabetically by the first letter of the patentee’s surname, then grouped by volume number of Patent Book, and finally arranged chronologically by date of patent.

Check out his Warrantee Map of Heidelberg township and you will be able to see how important his work is. The charts accompanying the maps, of course, include far more information.

Unfortunately, Mr. Wolfson’s booklets are out of print and he has no plans at this time to republish them. Mr. Wolfson informs us that the Library of Congress has a complete set of his work. The Family History Library has 13 of his 16 booklets (lacking only Cornwall & West Cornwall, Jackson, and South Londonderry Townships; search by author’s name), and you may request copies of a limited number of pages from them.

Other repositories which contain some or all of his work are the Pennsylvania State Archives in Harrisburg; the Allen County Public Library; the Lebanon County Historical Society; and the Lancaster Mennonite Historical Society. For the missing townships, you may contact Ancestor Tracks.

We have compiled an index of the warrantees and patentees from all of Mr. Wolfson’s 16 township booklets on file at the Library of Congress and are posting that index here as two .pdf files (one index by name, and the other one by township) so that you will know which booklet to order from one of the repositories. Be sure to open the “Bookmarks” tab for quicker searching. Also, be aware that a name may appear more than once on several pages and in both the warrantee and patentee column of a page, so be sure to search all pages of the relevant township:

We are posting below free, downloadable images of the County Atlas of Lebanon Pennsylvania from Recent and Actual Surveys Under the Superintendence of F. W. Beers published by F. A. Davis in 1875. This is an amazing atlas–if you look carefully, you will see some names in larger script than others on the township maps. The larger type denotes the owners of the original tracts. We hope that you will find this atlas a useful tool when coupled with the 1860, 1870 and 1880 census and published county histories such as Daniel Rupp’s 1844 History of the Counties of Berks and Lebanon and William Henry Egle’s 1883 History of the Counties of Dauphin and Lebanon in the Commonwealth of Pennsylvania. 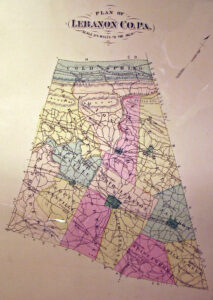 In the years since we posted these images, the University of Alabama obtained and digitized a copy of this atlas and has posted excellent images of it.  The Plugin version that can be zoomed in on is far easier to use than the jpeg version.