The state of Pennsylvania began platting the exact metes-and-bounds tracts of the earliest landowners, township-by-township, starting in 1907, but the Land Office only completed about 1/3 of the state before the project ended.

Unfortunately, Pennsylvania did not plat the tracts of the earliest landowners of Lehigh County. In 1816, Isaac Chapman drew a “Draft of the Original Surveys of Lehigh County,” but we have been unable to locate the original version. We are posting a microfilm version on file in the Library of Congress which we have pieced together from four microfilm images–it has been said that the original is framed and is in the basement of the Lehigh Co. Historical Society in Allentown but diligent efforts on our part have failed to locate it. We apologize for the poor legibility–it was the best we could produce from the dark microfilm.

The only way to find the date, book and page of the original warrant, survey, and patent for your ancestor is to do what the state draftsmen did to create their warrantee maps of other counties.  They searched through the relevant county Warrant Register, and that of its parent counties, now posted on the Pennsylvania State Archives website where each page of each county’s ledger is a separate pdf file, or download and save to your computer the entire set of 67 county Warrant Registers plus 3 pre-1733 ledgers called First Landowners of PA: Colonial and State Warrant Registers in the PA Archives, Harrisburg, 1682-ca 1940 ($35).   Once you have found the information, you can access the free online surveys, and you can order copies of the original documents from the Pennsylvania State Archives in Harrisburg using their order form.

In lieu of being able to bring you Township Warrantee Maps of the earliest settlers, we are posting images from Illustrated Atlas of Lehigh County published in 1876. This atlas is located in the Library of Congress Geography and Map Division Washington, D.C. We hope that it will be a useful tool for locating your Bedford County families when coupled with the 1870 and 1880 census and published county histories: the Mathews and Hungerford 1884 History of the Counties of Lehigh and Carbon in the Commonwealth of Pennsylvania and Daniel Rupp’s 1885 History of Northampton, Lehigh, Monroe, Carbon, and Schuylkill Counties. 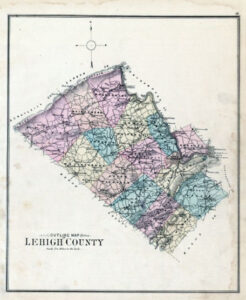 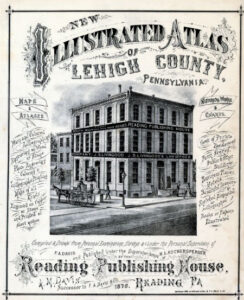