The state of Pennsylvania began platting the exact metes-and-bounds tracts of the earliest landowners, township-by-township, starting in 1907, and they did complete connected tract maps of the earliest landowners of Luzerne County. The unindexed warrantee maps which show the very first owners of land in the county are have been posted online by the Pennsylvania State Archives and links to them are below (scroll to below the 1873 atlas image links).

They also searched Pennsylvania’s index to Patent Registers ($35). Within an index covering the relevant years, the names are grouped alphabetically by the first letter of the patentee’s surname, then grouped by volume number of Patent Book, and finally arranged chronologically by date of patent. Thus, you have to look through the entire alphabetical section (which may be as little as one page to as many as 50) to be sure you don’t miss anyone.

Remember that Luzerne County was created from part of the original vast Northumberland County in 1786 (and Lackawanna County was carved from Luzerne County in 1878), but many of the earliest landowners purchased before Luzerne was created.  Thus you may have to search in those three counties for warrants, wills, court records, etc., depending on when your ancestor settled in the region.  The entire area was known as the Wyoming Valley which you can read about in the 1909 A History of Wilkes-Barre, Luzerne County, Pennsylvania: from its first beginnings to the present time, including chapters of newly-discovered early Wyoming Valley history….   Also see the 1845 “History of Wyoming, in a Series of Letters from Charles Miner to his son William Penn Miner, Esq.”  on Joyce Tice’s incredibly helpful website.

Until a compromise was worked out in 1782 under the Articles of  Confederation, the entire northern 1/3 of Pennsylvania was claimed by both Connecticut and Pennsylvania because King Charles II of England had inadvertently granted the land to both colonies.  A series of skirmishes called the Pennamite-Yankee Wars broke out, costing bloodshed on both sides before and during the Revolutionary War.  Luzerne County was eventually cut up into several counties: Bradford, which was originally called Ontario County, was created from parts of Luzerne and Lycoming Counties in 1810; Lackawanna was carved from Luzerne in 1878; Susquehanna County in 1810; and Wyoming County in 1842.

We are posting free, downloadable images from the 1873 Atlas of Luzerne County, Pennsylvania, from actual surveys by and under the direction of D. G. Beers published by A. Pomeroy & Co. We hope these images will be useful for pinpointing the whereabouts of residents in the 1850-1880 census records and those mentioned in the 1893 History of Luzerne County, Pennsylvania by Henry C. Bradsby. The 1873 atlas also includes images of simplified Warrantee Maps of Luzerne and Lackawanna Counties, but more information regarding each tract can be found in the Township Warrantee Maps posted by the Pennsylvania Archives (below the atlas).

Click on the title page to see the arrangement of townships 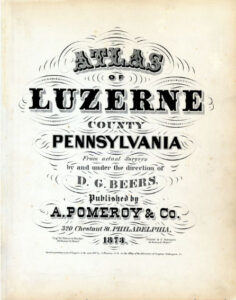 Warrantee Maps of Luzerne County in the Pennsylvania State Archives

Again, these land transfers predate the deed books located in each county because they deal with the first transfer of land to private individuals from Pennsylvania’s colonial or state government.

Several maps exist for this area. See the 1872 map of Sullivan, Tioga, Luzerne, Bradford, Wyoming, Susquehanna, and Lycoming Counties. A zoomable 1864 Map of the County off Luzerne, Pennsylvania, is posted by the Library of Congress. Black-and-white images of the 1873 atlas with more detail for towns and villages are posted at the U.S. Genweb Archives.  Also, a separate 1894 Atlas of the Wyoming and Lackawanna Valleys and Map of Luzerne and Lackawanna Counties, Penna. by G. W. Baist is on the Library of Congress website.