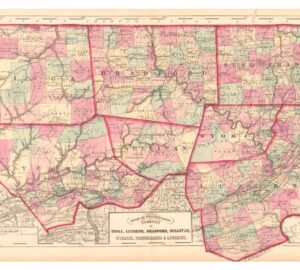 If your ancestor was a first landowner in the county, the only way  to find the date, book and page of the original warrant, survey, and patent for your ancestor is to search for him or her in the correct alphabetical section and then chronologically through county Warrant Registers on the Pennsylvania State Archives website where each page of each county’s ledger is a separate pdf file, or download and save to your computer the entire set of 67 county Warrant Registers plus 3 pre-1733 ledgers called First Landowners of PA: Colonial and State Warrant Registers in the PA Archives, Harrisburg, 1682-ca 1940 ($35).   Once you have found the information, you can access the free online surveys, and you can order copies of the original documents from the Pennsylvania State Archives in Harrisburg using their order form.

Lycoming County was formed from Northumberland County in 1795. Thus, both of these counties should be checked for warrants, deeds, wills, etc.

As we have done for numerous Pennsylvania counties (hover over each county on the PA map to see what is available for each county) and in lieu of being able to bring you Township Warrantee Maps of the earliest settlers, we are posting images from 1873 Atlas of Lycoming County Pennsylvania from Actual Surveys by and under the direction of Beach Nichols published by A. Pomeroy & Co. This atlas is located in the Library of Congress Geography and Map Division Washington, D.C. Unfortunately, because of the quality of the original atlas, we were unable to produce completely clear images but we hope that you will find it a useful tool for when coupled with the 1860, 1870 and 1880 census and published county histories. Speaking of histories, a digital version of the 1929 History of Lycoming County by Col. Thomas W. Lloyd is at the Penn State University Library Digital Collections, and the same History of Lycoming County  is currently being transcribed by the Foulkrod Research Group along with other resources. Also, the 1892 History of Lycoming County, Pennsylvania edited by John F. Meginness can be downloaded for free from archive.org. 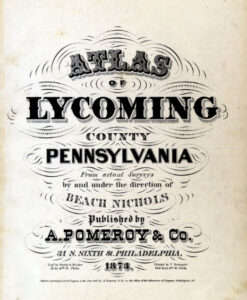 Click here for the excellent Outline Map from History of Lycoming County
by Meginness, 1892