Typically, the Warrantee Maps produced by the Land Office of Pennsylvania have been very helpful for genealogists trying to track down the earliest settlers of the county, but vast areas of McKean County were purchased by land speculators after the Treaty of 1784 (also known as the “Last Purchase–see the explanation on our Elk County page). Thus, these maps are less useful to genealogists than the Warrantee Maps produced for areas outside the Last Purchase.  We have posted links to the Warrantee Maps (scroll below the 1856 and 1871 landowner map images).

What is now McKean County was disputed between Pennsylvania and Connecticut before 1808 (or 1827, depending on the source).  In 1785 McKean County was part of Northumberland County until it became part of Lycoming County in 1795. McKean was finally carved out of Lycoming in 1804, becoming its own county. You will have to go to or contact those counties for warrants, wills, deeds, etc., depending on when your ancestor settled here.

As we have done for numerous Pennsylvania counties (hover over each county on the PA map), we are posting free, downloadable township images of two landowner maps of McKean County, one from 1856 and the other from 1871. We hope these maps will be helpful when coupled with the 1850, 1860, 1870 and 1880 censuses and published county histories such as the 1890 History of the Counties of McKean, Elk, Cameron, and Potter and McKnight’s 1905 A Pioneer Outline History of Northwestern Pennsylvania, Embracing the Counties of Tioga, Potter, McKean, Warren, Crawford, Venango, Forest, Clarion, Elk, Jefferson, Cameron, Butler, Lawrence, and Mercer. 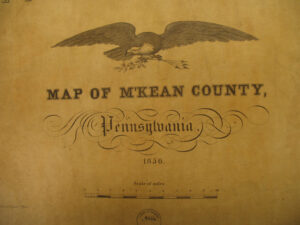 The 1871 map in the Library of Congress is so fragile and faded that it was necessary to make copies from a negative image of the map so that the names would show up legibly. We hope that these images will enable McKean County researchers to locate their ancestors even though the maps are not as pretty as the others we have posted. 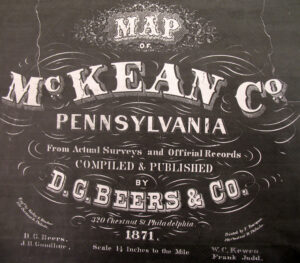 
The following Warrantee Township Maps showing the first people to warrant, survey, and patent land in McKean County have been posted by the Pennsylvania State Archives.

These are large files and may take some time to download.