This area was part of the Donation Lands given to Revolutionary War soldiers based on their rank, so locating an ancestor here definitely warrants further research into Revolutionary War records. Any Revolutionary War pension or service record will probably be on file in state archives rather than federal records since the land was given by the state of Pennsylvania. Note that land records may be the only piece of evidence that your ancestor served in the Revolutionary War!

Images from the 1873 Combination Atlas of Mercer County and the State of Pennsylvania are online at the Mercer Co. U.S. Genweb Maps Project site. Many thanks are due to the wonderful people who scanned these images and are making them available to researchers! This 1873 atlas should be used when you find your ancestors on the 1850-1880 censuses, as well as published county histories above. Many of the families documented in A Twentieth Century History are shown on the 1873 atlas.

Teri Brown maintains an excellent “Mercer County Genealogy” page on rootsweb. Pay special attention to how the townships evolved over time. Thank you, Teri, for the incredible wealth of resources you are bringing to researchers of Mercer County families! 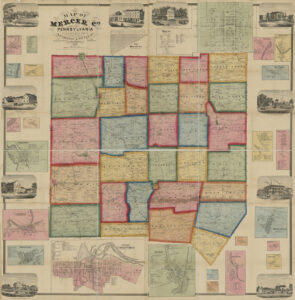 Click on the township of your choice below. Once the images are loaded, they can be enlarged by clicking on them. If an image doesn’t enlarge, right-click on it and choose “Open Image in New Tab.”  When it is opened in a new tab, you will be able to zoom in. You can also save the images. They are fairly large images and may take some time to download.

As mentioned above, the Pennsylvania Archives has posted Warrantee Maps showing the very first landowners for all of the townships of Mercer County. Unfortunately, they are not indexed.

Please note that these land transfers were from the colonial or state government to the first private landowners. These transactions predate the deed books located in each county which show transactions from one person to another person.  Once the land passed into the hands of a private owner, any subsequent transfer of the land was recorded as deeds in the county courthouse as it existed at that time.

Scroll down to the tutorial we’ve posted below the table to learn how best to use these Warrantee Maps to gain the maximum information regarding your ancestor’s tract.

Tutorial: The following is an explanation of the descriptions shown on each tract. Refer to the tract owned by Private Samuel ALLEN in the northwest corner of the Coolspring Township map for this discussion. You will see that 200 acres and an allowance of 6% for roads was warranted to Private Allen, No. 676 and it was surveyed 22 July 1785 and recorded in Survey Book C181, pg. 56. Then it was patented 6 Nov 1786. These individual surveys have been posted online by the Pennsylvania Archives in Harrisburg. In this case, the survey shows that the tract was issued as “Donation Lands promised the Troops” in an act by the state of Pennsylvania 24 Feb 1785. Tract No. DCLXXVI (676) was situated in District No. 4 on the west side of Allegheny River in (then) Westmoreland County. The fact that he was entitled to Donation Land indicates that he fought through the Revolutionary War until its end. It does not mean, however, that he enlisted in Mercer County, only that he received land in Mercer Co. in lieu of hard currency.

Can we find out more about Pvt. Samuel Allen? The original Donation Land Registers have been posted. We know the number of Allen’s tract (676) so the easiest approach is to look under “Numerical Listing of Donation Land Tracts” under District 4. If the survey book and page number had not been entered on the Warrantee Map, this would be the only source to locate it. Under “Listing of Veterans Entitled to Land,” pg. 1, we see that Samuel Allen served in the 1st Battalion of Infantry as a private. A search through “Donation Claimant Papers” under “Surnames beginning with ‘A” brings up the image of the original 2 Oct 1786 Power of Attorney granted (and signed) by Samuel Allen (pg. 28). He granted power to Mr. Richd Renshaw to “Act in all Cafes Nefary” to obtain a patent for his donation land and shows that he was in the Pennsylvania Line. Witnesses were Thomas Johns and William Jones. These papers are not indexed or alphabetized under the letter A, so they must be examined individually.

Also, look in Twentieth Century History of Mercer County, Pennsylvania and other county histories (links are above) for family information and search the Digital Library of Historic Pittsburgh as well as the published Pennsylvania Archives (free on Fold3).

Obviously, not all of the land in Mercer Co. went to soldiers. Adjoining Allen at the southeast corner in Coolspring Twp. is Aaron Church. According to this Warrantee Map, Church received a warrant dated 21 Apr 1794, it was surveyed 23 May 1795 (recorded in Survey Book C29, pg. 108), and it was patented 11 July 1826 to Robert Bowman (recorded in Patent Register H23, pg. 623). Sometimes there are many years between each of the three steps (warrant, survey & patent) in finalizing the title of the first landowner and the tract may have passed through several hands before the patent is granted since each step involved paying a fee; in this case it officially passed to another owner long after Church warranted it, but it may have passed through several hands unofficially.