If your ancestor was actually a first landowner, purchasing his or her property from the colony or state of Pennsylvania, further information about these tracts may be gleaned from the Warrant and Patent Registers.

The only way to find the date, book and page of the original warrant, survey, and patent for your ancestor is to do what the state draftsmen did to create their warrantee maps of other counties.  They searched through the relevant county Warrant Register, and that of its parent counties, now posted on the Pennsylvania State Archives website where each page of each county’s ledger is a separate pdf file, or download and save to your computer the entire set of 67 county Warrant Registers plus 3 pre-1733 ledgers called First Landowners of PA: Colonial and State Warrant Registers in the PA Archives, Harrisburg, 1682-ca 1940 ($35).

Once you have found the information, including the Survey Book and page number, you can access the free online surveys.  You can also order copies of the original documents from the Pennsylvania State Archives in Harrisburg using their order form.

Keep in mind that Monroe County was created from Pike and Northampton Counties in 1836.  In turn, Pike was created from Wayne County in 1814 (Wayne was part of Northampton County until 1798), and Northampton was formed from Bucks County in 1751.  These dates are important, as the earliest land warrants were filed under the county as it existed at the time the warrant was issued.  Thus, you will have to search all relevant counties for land records, wills, court records, and church records depending on when your ancestor settled here.

As we have done for numerous Pennsylvania counties (hover over each county on the PA map to see what we have uploaded), we are posting completely free, downloadable township images from Map of the Counties of Monroe and Carbon, Pennsylvania From surveys under the direction of H. F. Walling. (New York, 1860).  We hope that you will find this atlas a useful tool for when coupled with the 1850, 1860, 1870 and 1880 census and published county histories: Daniel Rupp’s 1845 History of Northampton, Lehigh, Monroe, Carbon, and Schuylkill Counties; Alfred Mathews’ 1886 History of Wayne, Pike and Monroe Counties, Pennsylvania; and Robert Brown Keller’s 1927 History of Monroe County, Pennsylvania, in the FamilySearch Library and at the Penn State University Digital Collections.  Also see the 1860 zoomable map of Monroe and Carbon Counties in the Leventhal Map Collection of Boston Public Library. 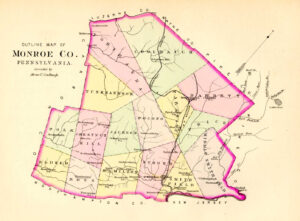