(1) Early Landowners of Northampton County: Forks of the Delaware contains Joel’s research of each original tract of 7 townships (Forks, Palmer, Lower Nazareth, Bethlehem, Hanover, Allen, and East Allen Townships).
Each township chapter contains tracts that Joel has assigned numbers to starting from “1.” The chapter begins with an orientation map of the area showing modern roads followed by more detailed quadrant sector maps labeled NE, NW, SE, and SW that includes the numbered tracts within the sector. Information for each tract includes: warrantee name (first applicant or claimant of the tract); warrant date; size of the tract; patentee (person who received final title to the tract); Patent Book and page number or Deed Book and page number where the transaction is recorded**; date of the patent or deed; Survey Book and page number or Deed Book and page number***; survey date; reference to the lot number given in the deed; and reference to the numbered location on the “Forks of the Delaware” map on page 14 and original surveys on pp. 16-19.

Joel’s book is a sequel to, and extension of, A. D. Chidsey’s “The Penn Patents in the Forks of the Delaware” (1937) that is online for free at  FamilySearch and at Ancestry (for members). As Joel writes about his “Forks” book, “This book piggybacks upon the data from the Chidsey book, coupled with newer Deed descriptions for subsequent tract owners, and superimposes the tract boundaries on a modern day baseline map. The baseline map has current roads, waterways and villages, thereby making pinpointing the location of a specific tract relatively easy.”

(2) Joel co-authored his second work, First Warrantees and Patentees of Moore Township, Northampton County, PA, with Dan Tanczos. This publication contains 328 tracts that are mapped onto a Warrant Survey Tract Map further divided into nine sectors labeled 1 through 9. Each of the nine sector maps is three miles wide and three miles long, and the original plats are overlaid onto modern road maps showing unlabeled streets and a few identifying geographical elements like creeks. As Joel states, mapping the tracts “was a best-faith effort to identify the current-day location of surveys associated with early warrants issued for Moore Township. Errors associated with the original surveys were discovered in the course of this research but were not corrected. As a result, some tracts overlap or do not abut as the surveyor intended.”

(3) “Nazareth Tract Deed Holders & Maps 1731 to 1926” documents  in detail how the Nazareth Tract (corresponding roughly with today’s Upper Nazareth Township) awarded to Laetitia Aubrey by the Penn family in 1731 changed hands over many years. Through a series of land transactions, the Nazareth Tract came into the possession of the Moravian Church, which over time transferred land to indivudual buyers. Using DeedMapper, Mr. Hoffner laboriously drew the metes-and-bounds of each individual tract. He then placed them onto currrent USGS maps showing “the location and perimeter of each tract and lot sold from 1731 to 1926.” To find individual tracts and owner, consult the “Deed Holder Name Index” which gives the map number in which the tract is recorded. Then find that number in the “Nazareth Tract Deed Holders Data Tables” which gives the date of the land purchase, grantor and grantee, Deed Book and page number where the deed is recorded. Finally, view the map on which the tract appears.

(4) Upper Mount Bethel, Lower Mount Bethel & Washington Townships starts with a large map of the three townships and breaks that map into 9 sectional maps covering the area. Numbers are given to each tract, drawn by Joel by DeedMapper, in that section. Following the maps, warrantees and patentees are sorted numerically within each sectional map. Information provided is compiled from the Bucks or Northampton Count Warrant Registers: Warrant Register and page number, name of the warrantee, name of the current township, date of the warrant, size of the tract (in acres and perches), name of the patentee, Patent Book and page number, date of the patent, Survey Book and page number, survey date , and name given to the tract by the patentee if applicable.

***Why are Deed Books entered instead of Survey Book references in his “Forks” book? After the Revolutionary War, the Commonwealth of Pennsylvania passed an act on 27 November 1779 declaring all land claims of the former Penn Proprietaries, except their private estates or manors, to be void. As of that date, all unpatented land became the property of the Commonwealth and these remaining tracts were surveyed over time as settlers applied for them; they are recorded in Survey Books placed online. By now, settlers had either purchased the Proprietors’ tracts legally or squatted illegally on most of the land in the “Forks” between the Lehigh and Delaware Rivers. The settlers wanted to secure final title to their lands but as early as 1759 the Penns through their agent declared: “I absolutely forbid all persons to purchase Improvement on the dry Lands, or any person to settle on said lands in the Forks of the Delaware.” The settlers did not move out and the controversy continued for many years. The Penns started an action to eject the settlers and finally a jury was sworn in on 5 June 1795. On 27 Nov 1795, Pennsylvania agreed to reserve title for the Penns to lands they had surveyed and set apart prior to 4 July 1776, and the Penns agreed to give the settlers a deed for the land they lived on within 12 months on the condition they pay the Penns about 65 pounds for each 100 acres. Most of these claims were not finalized and recorded in Northampton County Deed Books until 1802. Keep in mind, however, that the land covered by Northampton deeds recorded in 1802 were often originally settled many, many years prior to the deed.
If the entry in the “Survey Source Book:Page” column has the word “SURVEY,” you would look up the survey in the online Survey Books; if the entry has “DEED,” it is probably the same deed shown in the “Patent or Deed Book:Page” column and you can look up the deed in the Northampton County Deed Book online at Northampton Co. Deed Books.

Check back often as Joel continues to work on the remaining townships of Northampton County. Thank you for such terrific work, Joel!

(2) Marie Robinson has published First Warrantees of Northampton County, Pennsylvania, Lehigh Township. She has listed all of the neighbors on the individual surveys and included images of each survey. A large connected tract map is included, and all names are indexed.

(3) Another good land resource for Northampton County is the set of volumes written by Candace Anderson. Although her books do not include maps, excellent information can be gleaned from her abstracts of the county deed books. Her work is published by Closson Press. Once you are on the Closson Press site, search by “Anderson” and/or “Northampton.”

To Do It On Your Own

The only way to find the date, book and page of the original warrant, survey, and patent for your ancestor is to do what Joel Hoffner and Marie Robinson, as well as the state draftsmen who created the warrantee maps of other counties, did.  They searched through the relevant county Warrant Register, and those of its parent counties, now posted on the Pennsylvania State Archives website where each page of each county’s ledger is a separate pdf file. Alternately, download and save to your computer the entire set of 67 county Warrant Registers (pdf files) plus 3 pre-1733 ledgers called First Landowners of PA: Colonial and State Warrant Registers in the PA Archives, Harrisburg, 1682-ca 1940 ($35).

Once you have found the information, including the Survey Book and page number, you can access the free online surveys.  You can also order copies of the original documents from the Pennsylvania State Archives in Harrisburg using their order form.

Susan Walters also transcribed Fritt’s  History of Northampton County, Pennsylvania as part of the Pennsylvania USGenWeb project.  She and Joe Patterson are to be commended for transcribing and posting this wonderful work on the Northampton County USGenWeb Archives site  (which has many other resources)–truly a work of kindness for those of us in the genealogy community.

An additional online resource is the 1874 Atlas of Northampton County published by A. Pomeroy and digitized by the University of Alabama (the Plugin version is much easier to use than the jpeg version), as well as another copy of the  1874 Atlas of Northampton County  (use the drop-down menu on the left to see the index on page 1 for navigation purposes). 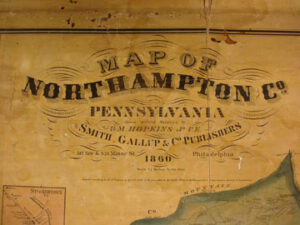