The state of Pennsylvania began platting the exact metes-and-bounds tracts of the earliest landowners, township-by-township, starting in 1907, but the Land Office only completed about 1/3 of the state before the project ended. Fortunately for some researchers, state draftsmen completed Township Warrantee Maps for about half of Northumberland County. Scroll down below the images of the 1858 Northumberland landowner map for links to the existing Warrantee Township Maps.

The draftsmen at the Pennsylvania Land Office used the Warrant and Patent Registers to create the Warrantee Maps. They searched each county and parent county, then each alphabetical section chronologically, in the set of 67 county Warrant Registers plus 3 pre-1733 ledgers called First Landowners of PA: Colonial and State Warrant Registers in the PA Archives, Harrisburg, 1682-ca 1940 ($35) which can now be downloaded and saved to your computer. (Free images  are also posted on the Pennsylvania State Archives website where each page of each county’s ledger is a separate pdf file).  The Warrant Registers give the Survey Book and page number onto which the loose survey was copied. The Pennsylvania State Archives has posted the online survey books  where you can access the surveys once you know the Survey Book and page number (both front and back side of each survey have been digitized).  Using the information from the Warrant Registers, you can order copies of the original documents from the Pennsylvania State Archives in Harrisburg using their order form.   The draftsmen also searched Pennsylvania’s index to Patent Registers ($35). Within an index covering the relevant years, the names are grouped alphabetically by the first letter of the patentee’s surname, then grouped by volume number of Patent Book, and finally arranged chronologically by date of patent. Thus, the entire alphabetical section must be searched (which may be as little as one page to as many as 50) so as not to miss anyone.

Bear in mind that  Northumberland County’s boundaries have changed dramatically over time.  It was originally unofficially part of Lancaster, and then most of it became part of Berks County when Berks was formed in 1752 while the southwestern tip remained in Lancaster County.  The County of Northumberland was formed in 1772, but it contained most or all of Bradford, Susquehanna, Lycoming, Sullivan, Wyoming, Lackawanna, Luzerne, Columbia, Montour, Union, Snyder, Centre, and Mifflin at the time.  New counties were created out of the huge county until it reached its current boundaries in 1813. Thus, depending on the year your ancestor settled here, you may need to check for warrantees, deeds, wills, etc. in Berks, Lancaster, and Northumberland Counties.

As we have done for numerous Pennsylvania counties (hover over each county on the PA map), we are posting free, downloadable township images of Map of Northumberland County, Pennsylvania From Actual Surveys by G.M. Hopkins which was published in 1858.  We hope that you will find this atlas a useful tool when coupled with the 1860, 1870 and 1880 census and published county histories. For example, check out Rupp’s 1847  History and Topography of Northumberland, Huntingdon, Mifflin, Centre, Unon, Columbia, Juniata and Clinton Counties, as well as Herbert Bell’s 1891 History of Northumberland County, Pennsylvania.

In addition, the entire 1891 History of Northumberland County, Pennsylvania, edited by Herbert C. Bell has been transcribed and placed online by Tony Rebuck. Nice job, Tony! 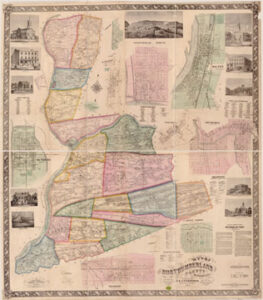 The following Township Warrantee Maps which show the metes-and-bounds tracts of the first settlers were drawn by draftsmen in the Pennsylvania Land Office. These are large images and will take time to download. It appears that these are the only townships for which Commonwealth of Pennsylvania draftsmen connected the surveys and patents and created a complete Township Warrantee Map.