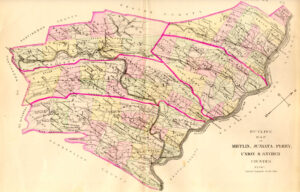 The area that became Snyder county was settled by Pennsylvania Germans from Lancaster and Berks Counties in the 1740s when it was loosely connected with Lancaster County.  Parts of Union and Snyder were originally split between Berks County and Lancaster County (1750-1772) and then the two counties were absorbed into Northumberland County (1772-1813).  Union County was created in 1813 and included Union and Snyder Counties; finally, Snyder became its own county in 1855.  These dates are important, as the earliest land warrants were filed under the county as it existed at the time the warrant was issued.

We hope that these landowner maps will be a useful tools for locating your Snyder County families when coupled with the 1850-1880 censuses. They should also be an indispensable aid when used in conjunction with two county histories that mention many of the owners found in this 1868 atlas: Wagenseller’s 1920 Snyder County Annals (Volume I and Volume II) and Franklin Ellis’ 1886 History of the Counties of Mifflin, Juniata, Perry, Union and Snyder in the Commonwealth of Pennsylvania (Vol. I and Volume II). 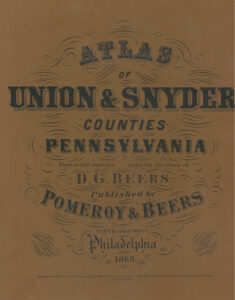 Click on this 1872 map to see Snyder in perspective with its surrounding counties.