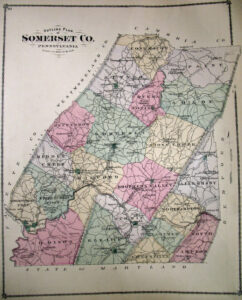 The state of Pennsylvania began platting the exact metes-and-bounds tracts of the earliest landowners, township-by-township, starting in 1907, but the Land Office only completed about 1/3 of the state before the project ended.  See our explanation of how land was transferred from the government to individual owners from the earliest days of settlement.

We are incredibly fortunate that, while Pennsylvania did not plat the tracts of the earliest landowners of Somerset County, it was taken on as a project by the Works Progress Administration (WPA). We are posting those maps below (scroll toward bottom).

Somerset Co. was created in 1795 from Bedford County after so many people moved into the area that it became necessary to open a new seat of government for them. Prior to 1771 when Bedford was created, the area belonged to Cumberland Co. Thus, all of these counties should be checked for warrants, deeds, wills, etc. If your ancestor was actually a first landowner, purchasing his or her property from the colony or state of Pennsylvania, he or she should be on these warrantee maps drafted under the WPA. Information on most tracts is as follows: (1) Name of the warrantee, (2) size of the tract, (3) warrant date, and (4) usually the survey date. With this data, you can find out more about the first owner(s) of the tract; then you can compare it to the 1876 atlas we are posting to find the location of the tract. Here is the process:

In addition to the WPA Warrant Atlas below, we are posting free, downloadable images of the County Atlas of Somerset, Pennsylvania published by F. W. Beers & Co. in 1876. We hope that it will be a useful tool for locating your Somerset County families when coupled with the 1860 and 1870 censuses and published county histories such as the 1884 History of Bedford, Somerset and Fulton Counties, Pennsylvania  and the 3-volume History of Bedford and Somerset Counties published in 1906 (Volume I; Volume II; Volume III).

If your ancestor was in the county before 1795 while it was still part of Bedford County, check out the website “Mother Bedford” maintained by Larry D. Smith. Larry has written extensively about early Bedford Co. and has posted much research, especially about early settlers and the Revolutionary War. 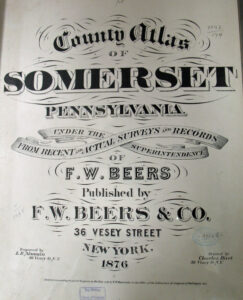 As mentioned above, a copy of Somerset County Atlas of Surveys and Warrants Collected and Plotted as a WPA Project, published in 1939, is located in the Office of Recorder of Deeds in Somerset. We purchased copies of the maps which we are posting here–we were assured these were the best copies available, although some of the writing is difficult to decipher. Only one township has been indexed, and if anyone creates an index for a township, we would be thrilled to post it! In the meantime, thank you very much, Tim Fisher, for taking the time to create this index for Lower Turkeyfoot Township! As Tim says, “A whole slew of the folks from Somerset Co., PA wound up in Perry Co., OH.” He should know since his grandmother was treasurer (and informal historian) of Perry County for 35 years who passed her extensive sources down to Tim, including her information on the Goodin family who came to Somerset County from Snyder County, PA, and then moved on to Perry County, OH. He has two websites for Perry County, Ohio: an interactive database with 22,000 individuals, and genealogy-related scanned and free sources for Perry County, Ohio. Do NOT miss his sites if your ancestors moved here! 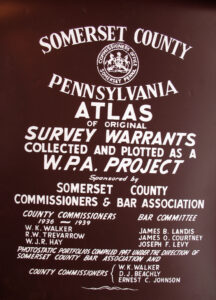 While the map is in the Somerset County Courthouse, we purchased the images to make them available to the public.  For those wishing to use them for personal use (including illustrating a family history you are working on), we give permission to use them, but we would appreciate attribution to Ancestor Tracks in addition to the WPA.