The state of Pennsylvania began platting the exact metes-and-bounds tracts of the earliest landowners, township-by-township, starting in 1907, but the Land Office only completed about 1/3 of the state before the project ended. Researchers of the first settlers of this area will be thrilled to know that the Pennsylvania State Archives has posted digital versions of Warrantee Maps showing the original owners of land tracts within the county. Scroll below the 1858 map images for links to these invaluable maps.

Susquehanna County was created from Luzerne County in 1810. Originally, the area that became Susquehanna County was in Northampton County (1752-1772), then Northumberland (1772-1786) and then Luzerne became its own county (which then included Bradford, Wyoming, Lackawanna, and Luzerne in addition to Susquehanna) in 1786.    These dates are important because warrants, wills, deeds, etc. were filed in the county as it existed at that time. 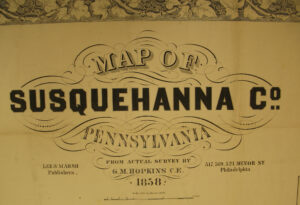 To put Susquehanna County in perspective, here is an 1872 map of the surrounding area