The state of Pennsylvania began platting the exact metes-and-bounds tracts of the earliest landowners, township-by-township, starting in 1907, but the Land Office only completed about 1/3 of the state before the project ended. Fortunately, Warren County is one of the completed counties and we are posting links to the township Warrantee Maps showing the metes-and-bounds plats of the first landowners of Warren County (scroll to below the atlas images).  See our explanation of how land was transferred from the government to individual owners from the earliest days of settlement and the tutorial below.

Thus, land in Warren County was being sold through two processes after the treaty was signed: (1) through the Last Purchase process, whose warrants are recorded in the Last Purchase Register; and (2) through the normal warrant process, in which case the warrants are recorded in the Warrant Register of the county in which the land resided at that time. Warren County was formed from Allegheny and Lycoming Counties in 1800 but before 1788 it was part of Northumberland County.

As we have done for numerous Pennsylvania counties (hover over each county on the PA map), we are posting completely free, downloadable township images from the 1878 Howden & Odbert’s Atlas of Warren County, Pennsylvania from Actual Surveys & Records by & under the directions of J. A. Howden & A. Odbert (Washington, PA: F. G. Longdon and Wilson Porter, 1878).  We hope these maps will be helpful when coupled with the 1860, 1870 and 1880 censuses and published county histories such as McKnight’s 1905 A Pioneer Outline History of Northwestern Pennsylvania, Embracing the Counties of Tioga, Potter, McKean, Warren, Crawford, Venango, Forest, Clarion, Elk, Jefferson, Cameron, Butler, Lawrence, and Mercer and the  1887 History of Warren County, Pennsylvania with Illustrations and Biographical Sketches of Some of its Prominent Men and Pioneers edited by J. S. Schenck (Syracuse, NY: D. Mason & Co., Publishers, 1887). A second version of this History of Warren County has been posted online at PA-Roots–many thanks to Nathan Zipfel for his outstanding work!

Also, Gardiner’s 1881 Map of Warren and Forest Counties has been posted by the Pennsylvania State Archives. 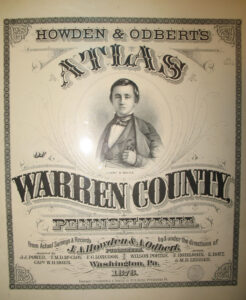 
Tutorial:  As mentioned above, the Warrantee Maps showing the original landowners of each township were drafted by the Pennsylvania Land Office, and they have been scanned and posted online by the Pennsylvania Archives.  As shown on pg. 122-3 of the county history by Schenck, after the Indian Treaty at Fort Stanwix of 1784 was signed (also called the “Last Purchase”), “…a company of Hollanders seeking an investment of their surplus funds, purchased the claim of John Adlum and Samuel Wallace to a large body of lands in this part of the State. For these they had warrants issued and surveys made in the names of Herman Le Roy and John Linklain. These names were used to evade the law, which, at that time, forbade aliens from holding titles to land in this State. On these warrants most of the land in this county, north and west of the Allegheny River and Conewango Creek, was surveyed and appropriated and originally owned by the Holland Land Company….”

According to the description by the Pennsylvania Archives, “Speculators of the Pennsylvania Population Company and the Holland Land Company took advantage of this provision [granting exceptions to the law requiring proof that warrantees had settled on the land for 5 years if they were “prevented from occupying their land by enemies of the United States” if they produced a letter from the deputy surveyor attesting the “prevention”] to buy up large numbers of warrants directly through the Land Office under fictitious names….To eliminate collusion between speculators and deputy surveyors, from 1799 county survey districts were redrawn and new deputy surveyors were appointed. The Commonwealth Supreme Court also reversed the Board of Property decision and ruled that the warrantee must show actual proof of settlement within two years of the date that military prevention ceased.”

Brokenstraw Township at the time the warrant was issued in 1793 belonged to Allegheny County.  Compare the atlas version of Brokenstraw Township posted above with the Warrantee Map of Brokenstraw Township below, for example, and you will see Tract #307 at the top of the township. By comparing that with the Township Warrantee Map below, it appears that the draftsman labeled the equivalent tract #5 (the broken lines delineate the township boundaries) so that he could write the particulars of the land transfers in the margin. The entry for #5 in the margin indicates that Aaron Dale (who may or may not have been fictional) was given a warrant on 10 Apr 1793, that the tract was surveyed on 9 Sep 1794 and contained 434 acres and allowance (the Commonwealth of Pennsylvania, continuing the practice initiated under colonial rule, required that 6% of virtually every tract be set aside for official uses such as roads), and that it was patented 8 Feb 1799 to Wilhem Willink, et. al. The tract was named “Elklick.” The entry further shows that the patent was recorded in Patent Register 38, pg. 195, and that the survey was recorded in Survey Book C46, pg. 112. Every fact listed here can be verified, and original documents referring to this tract can be ordered from the Pennsylvania Archives. An explanation of the process follows.

Warrant Register: A search of the Last Purchase Register did not reveal a warrant for Aaron Dale, but he is listed in the Allegheny County Warrant Register. His entry (under the letter “D”) in the ledger shows that he received a warrant for 400 acres on 10 Apr 1793, that the survey containing 434 acres was returned for patenting 7 Feb 1799 to Wilhelm Willink. It confirms that the patent was recorded in Patent Register P38, pg. 195, and that the survey was recorded in Survey Book C46, pg. 112. According to the Allegheny Co. Warrant Register, a remarkable number of Dales were awarded separate warrants on that 10 April date: Sarah, Jonas, David, Daniel, Eliza, Noah, Hannah, Ann, Philip, Isaac, Peter, Israel, Grace, Roger, John, George, Elihu, James, Matthew, Aaron, Enoch, Owen, Paul, Edward, Aaron, Mark, Samuel, Benjamin, Robert, John, Nathan, Moses, George, Richard, William, Mary, Simon, Caleb, Luke, and Lydia. All of these tracts were patented to Wilhelm Wilink between 30 January and 11 February 1799–highly coincidental indeed, especially given the new law of 1799 tightening the requirements! None of these names are mentioned in the chapter on Brokenstraw Township in the History of Warren County (pp. 401-420) which details nearly all of the settlers prior to 1806 in the township.

Survey: Survey Book C46, pg. 112. The survey shows that his tract was surrounded by those of Matthew Dale, Israel Dale, Noah Dale and Jonas Dale.

Patent: The index to Patent Register P38, pg. 195, confirms that Wilhem Willink, et. al., patented 434 acres called “Elk-Lick” on 8 Feb 1799 which had been warranted to Aaron Dale on 10 Apr 1793. The numbers on the tracts in the 1878 atlas refer to numbers assigned to the tracts purchased under the 1784 “Last Purchase” and the sale warrants are recorded in the Last Purchase Warrant Register at the Pennsylvania Archives in Harrisburg. The warrants can be searched by scrolling through the pages under the first initial of the surname of the purchaser. Thus, Tract #2579 appears on pg. 48 (under “W”) which verifies that it was granted on 12 Dec 1792 to “Willink, Wilhem and others” with an estimated size of 900 acres. The survey was returned for patenting to Silas X. Billings on 20 Apr 1874 with an actual size of 1002 acres. It confirms that the Patent was recorded in Patent Register H72, pg. 672 (since the patentee was Silas Billings, his patent was indexed under the letter “B” in the Patent Index Registers). The last column in the Last Purchase Register shows that the survey is recorded in Survey Book D7, pg. 127, which has been posted online with all other surveys by the Pennsylvania Archives. See the explanation of the Last Purchase of 1784 on our Elk County page and a map showing the Last Purchase counties in yellow).