Wyoming County was not created from Luzerne County until 1842. Originally, the area that became Susquehanna County was in Northampton County (1752-1772), then Northumberland (1772-1786) and then Luzerne became its own county (which then included Bradford, Susquehanna, Lackawanna, and Luzerne in addition to Wyoming) in 1786.   These dates are important because warrants, wills, deeds, etc. were filed in the county as it existed at that time.

Please note that these land transfers predate the deed books located in each county because they deal with the first transfer of land to private individuals from Pennsylvania’s colonial or state government. Once the land passed into the hands of a private owner, any subsequent transfer of the land was recorded as deeds in the county courthouse as it existed at that time.

As we have done for numerous Pennsylvania counties (hover over each county on the PA map to see what we have uploaded), and in lieu of being able to bring you Township Warrantee Maps of the earliest settlers, we are posting completely free, downloadable township images  Topographical map of Wyoming Co. Pennsylvania from Recent and Actual Surveys and Records, under the Superintendence of F. W. Beers (New York, 1869).  We hope that you will find this atlas a useful tool for when coupled with the 1850, 1860, 1870 and 1880 census and published county histories. They are both online: the 1880  History of Luzerne, Lackawanna and Wyoming Counties by W. W. Munsell, and the 1830 The History of Wyoming by Isaac Chapman (also known as A Sketch of the History of Wyoming). 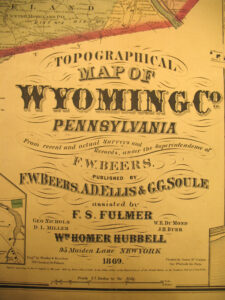 To put Wyoming County in perspective, here is an 1872 map of the surrounding area