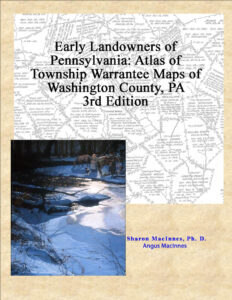 On this page you will find a newly revised (2020) edition of our Washington County atlas for sale, first published in 2004.  It contains all of the Township Warrantee Maps drafted by the Pennsylvania Land Office in the 1920s when they worked on a project to research the original surveys and locate them once and for all on maps of current townships.

The draftsmen at the Pennsylvania Land Office painstakingly platted the metes-and-bounds of each original tract into current township boundaries using the Warrant and Patent Registers to create the Warrantee Maps. They searched each county and parent county, then each alphabetical section chronologically, in the set of 67 county Warrant Registers plus 3 pre-1733 ledgers called First Landowners of PA: Colonial and State Warrant Registers in the PA Archives, Harrisburg, 1682-ca 1940 ($35) which can now be downloaded and saved to your computer. (Free images  are also posted on the Pennsylvania State Archives website where each page of each county’s ledger is a separate pdf file).  Nearly all of the individual loose surveys were gathered together and copied into ledgers early in the 20th century, and we are indeed fortunate that the Pennsylvania State Archives has posted these “Copied Survey Books” online. To find the Survey Book and page number, consult the “Survey Book” column in this atlas (check both front and back sides).  You  order copies of the original documents from the Pennsylvania State Archives in Harrisburg using their order form.

The chapter following these maps  includes each fact included on every tract on the Township Warrantee Maps: names of the warrantee and patentee; size of the tract; name of the tract, if given; dates of the warrant, survey, and patent; plus the Patent Register and page number where the patent was recorded (see sample below). Finally, we added the atlas coordinates where the tract in question is located on the 2nd map.

The draftsmen, however, did not include the survey book and page number, so we recently added this information by looking up each tract in county Warrant Registers.  We added numerous footnotes giving further information, including many neighbors shown on surveys at the time the survey was conducted.  Some of these neighbors do not appear anywhere else in land records.

The warrantee maps show the location of the earliest landowners of the county—in other words, those who bought their land directly from the colony or state. After a tract was transferred to a private individual, subsequent transactions were recorded in the county courthouse. The maps show precise outlines in metes and bounds of each original tract and all surrounding tracts in the township, making it possible to locate allied families, baptismal sponsors, neighbors, fellow church members, and migration companions. If your ancestor was actually a first landowner in the county, purchasing his or her property directly from the colony or state of Pennsylvania, you should find him or her in this atlas.

Please note that these land transfers predate the deed books located in each county because they deal with the first transfer of land to private individuals from Pennsylvania’s colonial or state government.  Once the land passed into the hands of a private owner, any subsequent transfer of the land was recorded as deeds in the county courthouse as it existed at that time.  Washington County was originally part of Cumberland County (1750-1771), then Bedford County (1771-1773), and then Westmoreland  County until Washington became a county of its own in 1781. Thus you may need to search those counties for deeds, wills, etc. depending on when your ancestor(s) settled here.

Example of Using the Atlas:  On the chapter page (left image), William “Millar” of Buffalo Township warranted a 426-acre tract on 29 June 1785 that was surveyed on 6 September 1785.  He patented it in 1787, gave it the name “Lochness” at that time, and the patent (or final title) was recorded in Patent Book P10, pg. 55. His survey was recorded in Survey Book C129, pg. 187. Footnote #25 indicates that he sold his land to John Perry and continues with other transfers of this land.

The middle image shows Buffalo Township and we can use the coordinates to find his tract at the top of the map extending into Hopewell Township (if the image does not enlarge, right-click on it and “Open Image in New Tab”  and then click on it again in order to enlarge it).

The image on the right is Miller’s survey in Survey Book C129, pg. 187, accessed by using the link for “Copied Survey Books“). We can see his neighbors as of the date of the survey (1785).  It’s possible that these people are allied families, so it’s wise to open their surveys to see if you can glean more information. In this case, the name he used for his tract, “Lochness,” may indicate the area from which he came.

Note that some of his documents use the spelling “Millar” and others use “Miller” but spelling was not standardized until the 20th century.  We typically used the spelling in the warrant register.

If your ancestors were present in Washington County in the later 1800’s, you may want to download our Caldwell’s Historical Atlas of Washington Co. of 1876 ($15). See free index here.  This atlas has colored maps of all of the townships labeled with the names of thousands of landowners, plus black & white drawings of many towns, boroughs, as well as lithographs of private residences and farms. It also contains a “business directory” of all of the businesspeople in the county in 1876 including, for many of them, the dates they settled in Washington Co. and the place they were born. Sometimes there is surprising information in this business directory; for example, Mrs. N. McQuown is listed in Donegal Twp. as owning 10 sheep and 31 acres, Post Office Atchison, and under “Business” it states: ” John L. McQuown was born 1837, April 12th, was married to Miss Nancy M. Martin on the 24th Feb., 1866. Died Dec. 7th, 1873.” In addition to the maps showing thousands of residents of the county and the business directory of each township and town, there are illustrations of many farms, residences, and businesses in the county.

One last thing — check out the University of Pittsburgh/Historical Society of Western Pennsylvania’s online library which has nearly 1,000 digitized books and pamphlets on Pennsylvania history online